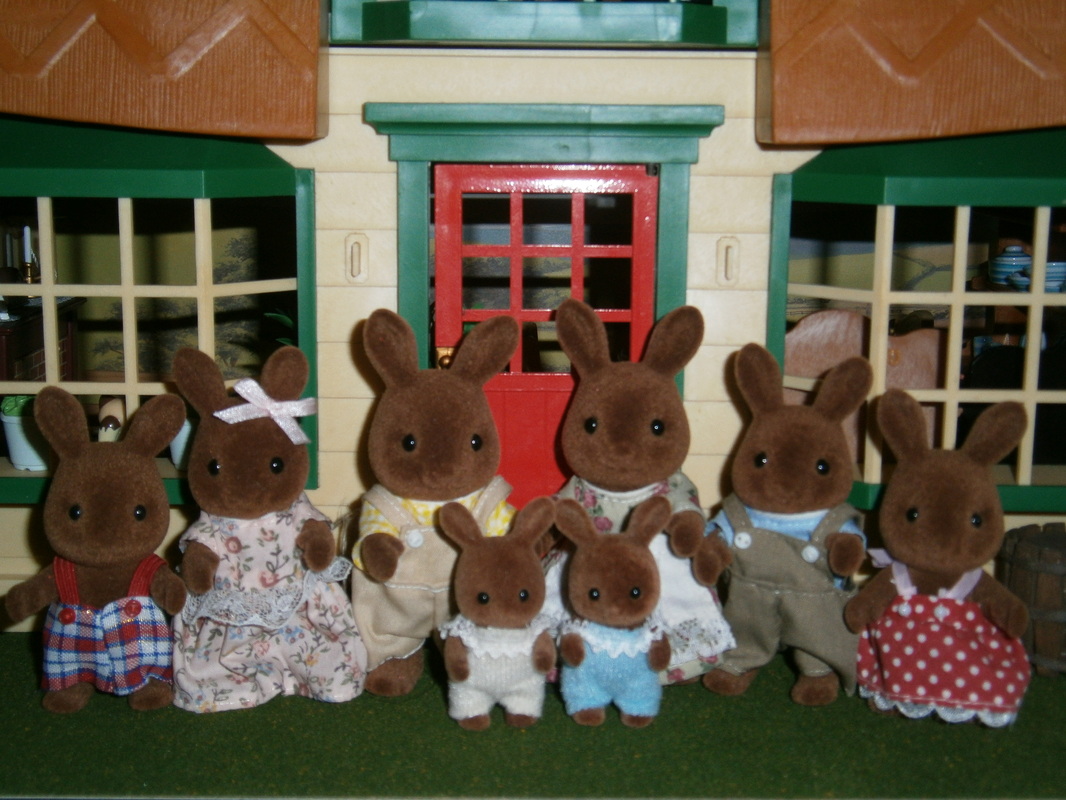 FATHER HERB WILDWOOD is a real party animal. He loves to throw parties and never needs a reason like a birthday or an anniversary to invite all his family and friends around for a bit of a do. He takes charge of the drinks and always makes his guests a big bowl of fruit punch full of fresh bananas, strawberries and pineapples. Then he likes to get everyone in the garden and teach them his favourite dance – the Bunny Hop, of course! He is a very social rabbit and can always be found surrounded by lots of his friends. His wife, Ginger, does not think he has grown up yet as he often goes out on trekking trips in the woods with his 'pals', Rocky Babblebrook, Hector Corntop, Ollie Oakwood and Wade Waters. They all enjoy each other's company so much that they tend to forget what day it is and what time it is and are often out for hours on end – much to their wives disapproval!

MOTHER GINGER WILDWOOD is a great hostess too. She is full of charm and chat and loves to entertain her guests with amusing stories about her theatrical past. Nowadays though Ginger is one of the best cooks in Sylvania. She is famous for her delicious party food like carrot surprise, carrot dip and spicy carrot bake. Her carrot cake is also a bit of a legend, so Ginger makes sure that no one leaves her house without a party bag and a big slice of it inside! Being married to Herb, she is often called upon to drum up party food at the last minute when Herb suddenly decides it's time to party! She prides herself with creating exotic menus and together with Crystal Babblebrook, they spend hours pouring over recipe books. Once everyone knows that there is a party on at the Wildwoods house – unexpected guests turn up too as they are guaranteed to have a ball!

OLDER BROTHER RAY WILDWOOD, from an early age was encouraged to sing and play the guitar at the family parties along with his sister Tina. Together they were very good and all the guests enjoyed the show, but now that he is older he prefers to party than sing. He is in college studying music. His mother hopes he will become a full time guitarist when he finishes.

OLDER SISTER TINA WILDWOOD, unlike her brother Ray, still sings whenever she has the chance. Her mother believes Tina's voice is getting better and stronger all the time. “Tina could become a full time singer when she finishes college,” Ginger tells everyone. She has a beautiful voice, and possibly the best vocal range in all of Sylvania, with a rumoured five octave range.

BROTHER RUSTY WILDWOOD is very, very musical. He can play most instruments well, but he likes the trumpet, drums and electric guitar best because they are loud and brash. Rusty has formed a band which has so many members now that it should really be called an orchestra – although maybe 'The Wild Things' is not really a suitable name for an orchestra! His favourite party trick is to play a selectio of instruments at the same time – a drum on his back, a tambourine between his long ears and an accordian between his paws. It is quite a funny sight and he sometimes gets mixed up as to which instrument he should be playing and ends up flat on his face!

SISTER HOLLY WILDWOOD is just like her father and loves to party. Christmas and birthdays are her favourite occasions as all her friends party at her house and bring her lots of presents! Just like the rest of her family she also has a party piece – she likes to dress up in her prettiest outfit and sing and tap dance for everyone! She will always lend a hand with the 'older' generation in Sylvania organising tea dance parties for them together with Misty Waters, her best friend, they put on 'olde tyme musical' shows which are great fun!

BABY SISTER JUNIPER WILDWOOD is an easy-going baby who can sleep through her family's loudest parties. She enjoys all the attention she gets as the guests arrive, but after an hour of being passed from one adoring pair of arms to another, Juniper announces “It's time for my story and bed!”

BABY BROTHER BARKLEY WILDWOOD can't sleep when there's a party on. Instead he hums to the music. 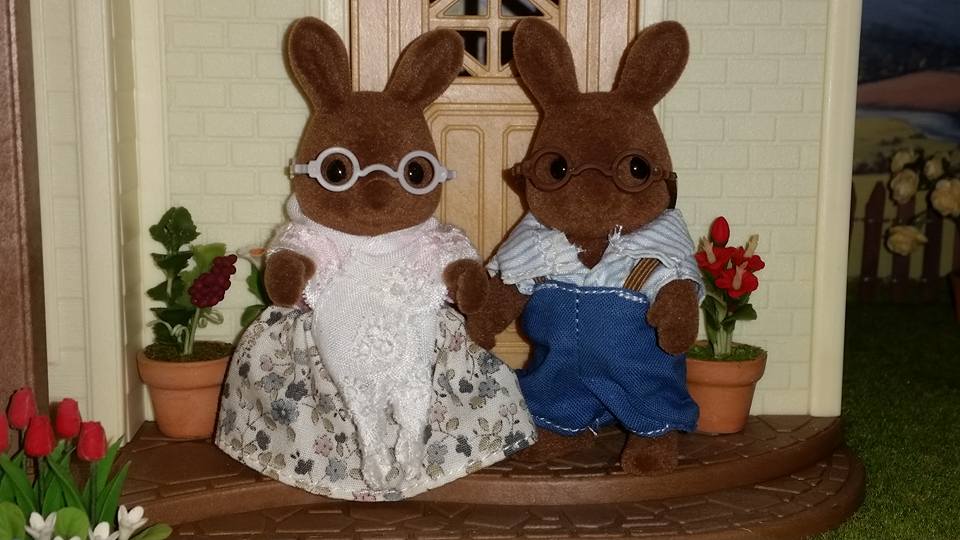 GRANDFATHER SMOKEY WILDWOOD is the grandfather of all the Wildwoods who live in Sylvania. He just loves to play with all his grandchildren and their friends. In fact, so much so, that he says it keeps him 'young at heart'. He can often be found playing games like tiddly winks or ludo with Holly and Rusty and their best friends, Bubba and Breezy Babblebrook. They have even had tournaments between families and no prizes for guessing who wins!

GRANDMOTHER FLORA WILDWOOD is just the opposite to her energetic husband. She just loves the quiet life and can often be found sitting by the fireside in her rocking chair knitting jumpers and cardigans for her grandchildren. The family joke is that she always knits jumpers which are just that bit too big and all her jumpers have very long arms. The only consolation is that they last for a very long time! 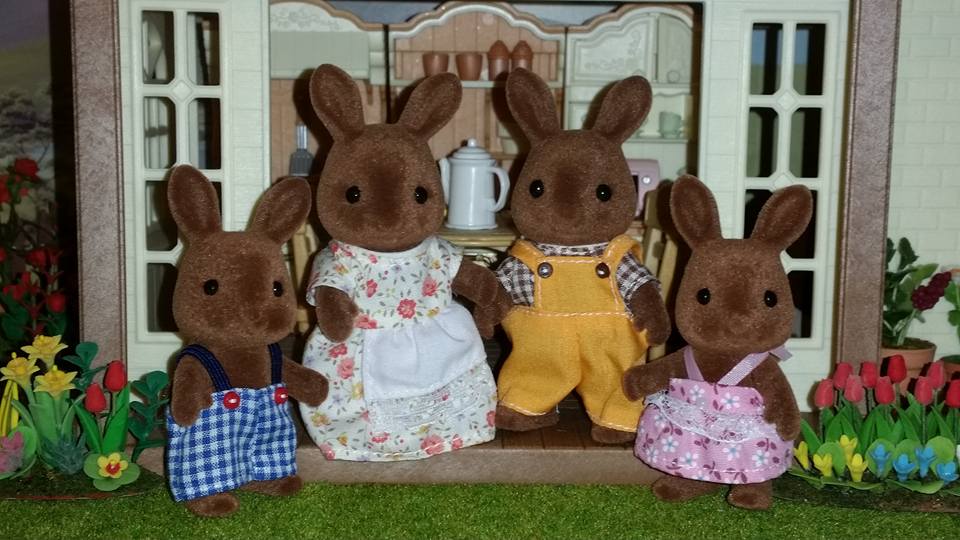 FATHER ROGER WILDWOOD, just like his brother Herb, loves a good party. It's lucky that they live next door to each other, as when Herb throws a party, so many guests arrive that they end up using both of their gardens to fit all the guests in! Some villagers say 'If Herb isn't throwing a party, Roger is!'

MOTHER MARGOT WILDWOOD loves playing board games with her family, when she gets the chance! She sometimes has to tell her husband Roger 'No parties tonight, it's games evening!' Of course, she does enjoy a good party, it's just the clearing up afterwards that she does not enjoy!

BROTHER RALPH WILDWOOD is known as the quiet one of the Wildwood family. Whereas the rest of the family enjoy partying or playing musical instruments, Ralph is quite happy sat in his room reading a good book. In fact, he is probably the first member of his family to go to bed in the evenings without needing to be told! Not because he is tired though, it's because he can't wait to read more of his book before he goes to sleep!

SISTER MEGAN WILDWOOD likes to sit with her grandmother by the fire, watching her knit. Flora is starting to teach Megan how to knit, and recently Megan was able to make some baby booties for her baby cousins Barkley and Juniper. The only thing is, whereas Flora is known for making knitwear far too big, Megan seems to knit everything too small! 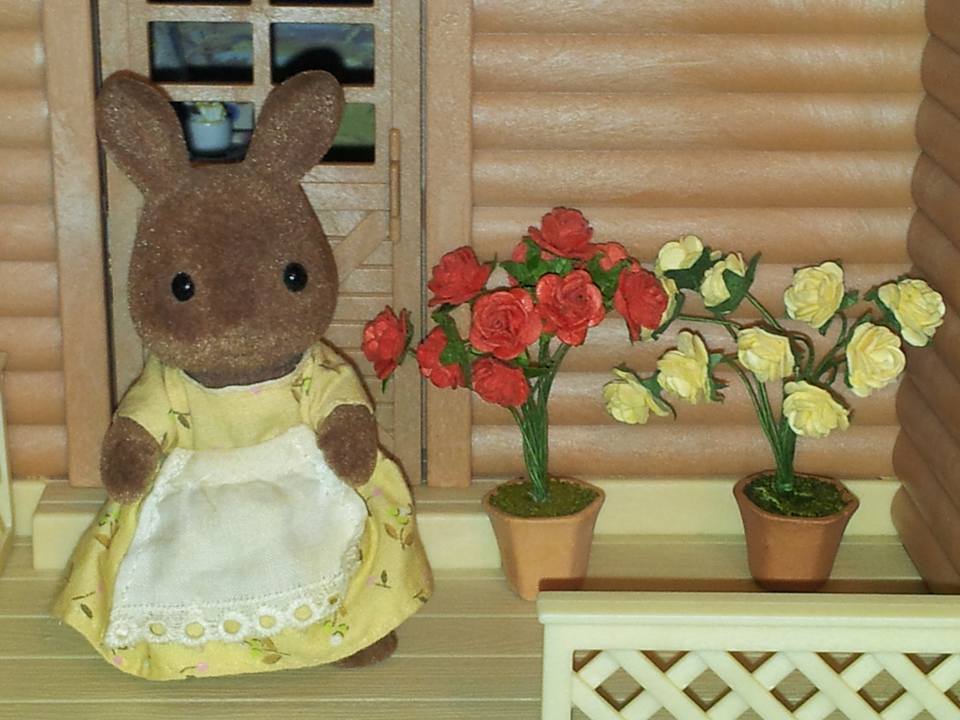 AUNTIE MOLLY WILDWOOD is a very keen gardener, and can often be found tending to her roses in her garden. Every Sylvanian who visits Molly knows that if nobody answers the front door, then to pop around to the garden as she will most likely be there!
Powered by