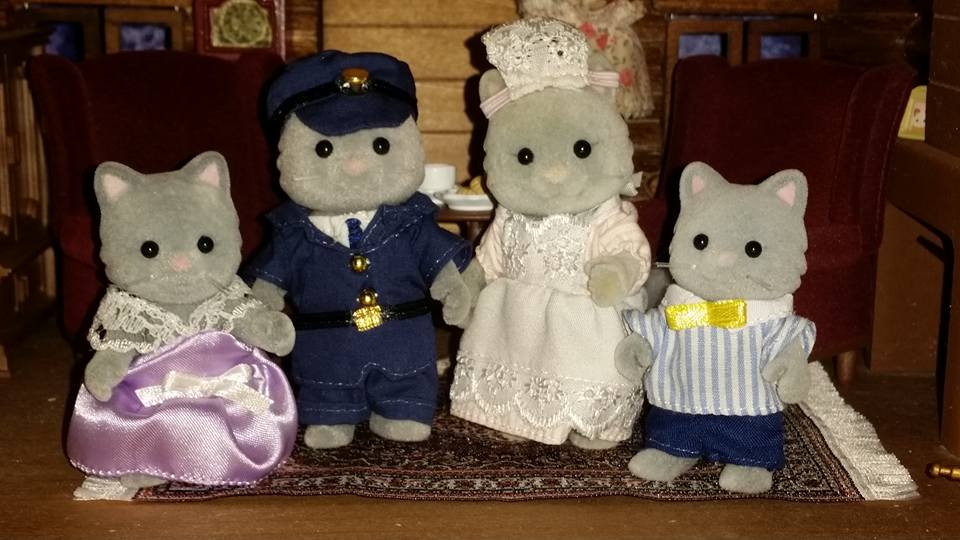 Suzette Simpkins is a very busy lady. She runs the Harvester restaurant with her childhood friend Basil Hazelwood. Whereas Basil is the chef, and is often kept busy in the kitchen, Suzette is front of house, welcoming each and every customer, and making them feel completely at home. She often comes up with bright, creative ideas for new desserts and meals, which keeps Basil busy creating them. Because of her expertise at the Harvester, Suzette was asked to help out at the Regency Hotel when it opened, with training all the front of house staff. She enjoyed it so much, that she still helps out there!!

PC Rowan Simpkins is the newest recruit to the Sylvanian Police force, working closely with his good friend, Bobby Roberts. A jovial chap, he can often be found patrolling the streets of the village, whistling along to himself. When he isn't patrolling the streets, he can often be found down at the river, enjoying his favourite past-time, fishing.

Gwendolyn Simpkins loves going to parties. She has many friends in the Sylvanian Village, and her mother sometimes says it feels like she goes to a different party each week! She loves playing all the traditional party games, like pass the parcel and musical statues.

Glynn Simpkins always seems to be out at different parties with his sister. He does enjoy himself, but sometimes wishes there were less parties to go to, so he could just play at home in his garden in his treehouse!

The first member of the Simpkins cat family that was released into the Sylvanian Families range, was Suzette in 1994. She came with Basil Hazelwood who was a chef mouse. Their original backstory was both of them running the new Harvester Restaurant in the Sylvanian Village. Basil and Suzette had a re-release a few years later when Flair took over the Sylvanian distribution in the UK. This time their backstory had changed, and they now ran the village bakery (previously run by the Beagle dog family). When the Hotel building was launched, Basil and Suzette came prepacked with it, as exclusive figures. Suzette was a stand alone figure in the Sylvanian village for almost twenty years, until her two chldren were released into the range by Flair in 2011, as a special birthday playset. Featuring both children along with several items for a birthday party, including presents a cake and balloons. A father figure was never released for the family officially, but I created my own with a spare Suzette figure and a policeman costume which was released exclusively into the Japan range. The Simpkins family used the same mould as the Urban life cat and Chantilly cats.
Powered by