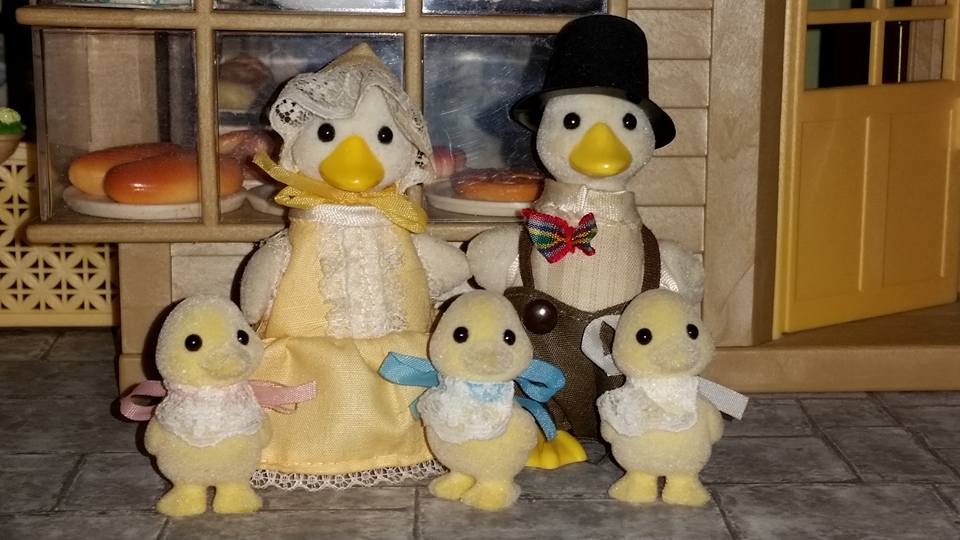 FATHER GEORGE PUDDLETON is very good at D.I.Y. Whenever anything is damaged or broken, he is usually able to fix it. When he moved into his cottage with Eliza, when they were first married, he practically rebuilt it on the inside. He transformed their living room, putting in a beautiful stone fireplace. His wife often tells him, that he should become a builder or a craftsman, as he is very talented.

MOTHER ELIZA PUDDLETON is a very successful and well-known author in the Sylvanian Village. She just used to write stories for fun in her youth, she would fill many notebooks with adventure stories, romance tales and childrens adventures. She used to keep all her books in the study, but one day her husband George found them and started reading them. As a surprise, he sent one of her books to a publisher, who loved it and agreed to publish it. George presented Eliza with a copy of her first ever published book on her birthday as a surprise present. Ever since then, she has had many other tales published, and there is a section in the Village Library dedicated to just her works!

BROTHER JOSEPH PUDDLETON is constantly splashing in puddles whenever there is rain. His parents despair, as he will be all bathed and dressed for the day, and the minute he sees a puddle he will be splashing about in it!

SISTER HARRIET PUDDLETON is happiest when her mother is reading her a bedtime story. She could sit for hours at a time, while her mother tells her stories of children who have adventures every day in a secret place called 'Misty Forest'. Harriet is convinced that the place exists, and is determined one day she will find it and have her own adventures there!

SISTER BEATRICE PUDDLETON wants to be an author like her mother when she grows up. She has already started writing her own stories, using the village residents as her inspiration!

The Puddleton Duck Family were originally released into the Japan Sylvanian Families Range in 1988, as part of the Urban Life Range. The Urban Life range launched in 1987, and was exclusive to Japan. Many of the buildings, families and furniture were released into the UK range, but were changed for release. The Puddleton Duck Family (not the official name, but one I created) were released as the Puddleford Duck Family in the UK. Their clothes were different, although the children looked very similar to the original Urban Life release upon their re-release under Flair. The Urban Life range is quite hard to find, but does occasionally appear on E-Bay or Rinkya.
Powered by