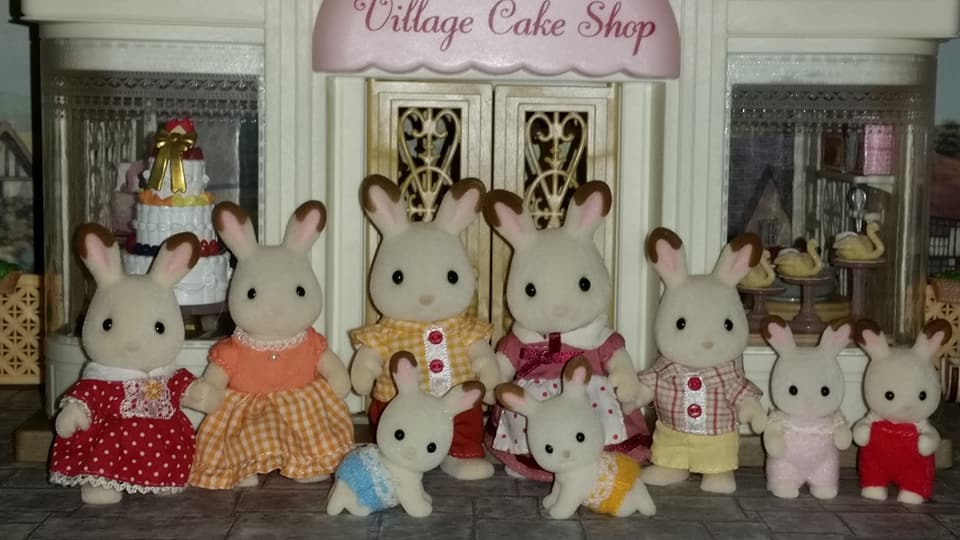 FATHER FRASIER CHOCOLATE has been making sweets since he was a young boy and he’s now a confectioner of the highest calibre. It all started when his mother showed him how to make crystallised fruit, which is very easy, but his chocolate creations today are a work of art as well as tasting heavenly.

MOTHER TERI CHOCOLATE makes all the fillings for Frasier’s chocolate creations; the strawberry surprise being the best. Her kitchen is always full of the rich smell of fruit mixed with the sweet smells of sugar and spices bubbling in pots. It makes your mouth water just thinking about it.

OLDER SISTER PEPPERMINT CHOCOLATE is the most fashion conscious rabbit in Sylvania. She has to have all her wardrobe with her at all times.

BROTHER COCO CHOCOLATE is not permitted to help his father or mother in the preparation of their confections concoctions because he eats more than he makes! He’s put to useful employment being delivery boy for the family.

SISTER FREYA CHOCOLATE, unlike her brother, doesn’t eat sweets or chocolate, so she helps her mother prepare the fillings. She does eat a lot of fruit though!

TWIN BABIES KABE AND BREEZE CHOCOLATE like to help clean up after their parents, licking the chocolate covered spoons and bowls. Teri, their mother, is sure more chocolate is put on their clothes than in their tummies!

BABY SISTER CREME CHOCOLATE loves bedtime. When it comes to time to say night-night, Crème rushes up stairs (with a little help from mummy) and eagerly awaits her bedtime story! Such a good little girl! 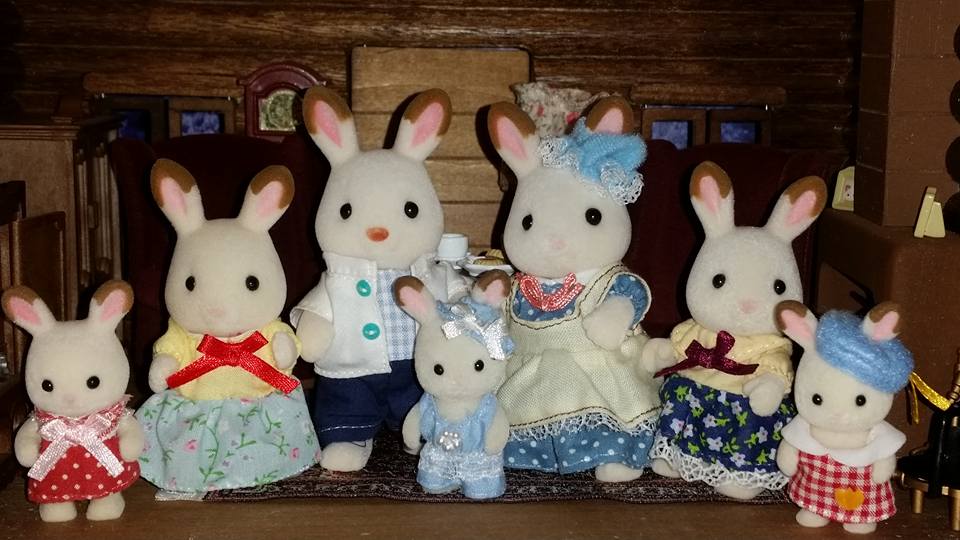 FATHER REECE CHOCOLATE enjoys planning all kinds of fun events and parties to be held in the Sylvanian Village. He also works with his brother Frasier in the 'Courtyard Restaurant', where he makes delicious breakfast pastries.

MOTHER CLAIRE CHOCOLATE always cooks delicious meals, and redesigns the children's clothes beautifully when they grow out of them. She is also known for her delicious soups, some say they are the best in the whole village.

SISTER CHERRY CHOCOLATE is very good at drawing and has won lots of prizes in school competitions. She can often be found down by the river, with her sketch book, catching the scenery.

SISTER CARAMEL CHOCOLATE is good at netball - she can throw a ball further than any of the other children.

BABY SISTER KELLY CHOCOLATE is full of curiosity - if something catches her eye, she'll run off to see it!

BABY SISTER HAZEL CHOCOLATE loves the pain au chocolat her father makes - she often has chocolate around her mouth.

BABY SISTER HONEY CHOCOLATE likes watching the flowers sway in the breeze and the butterflies fluttering through the sky. 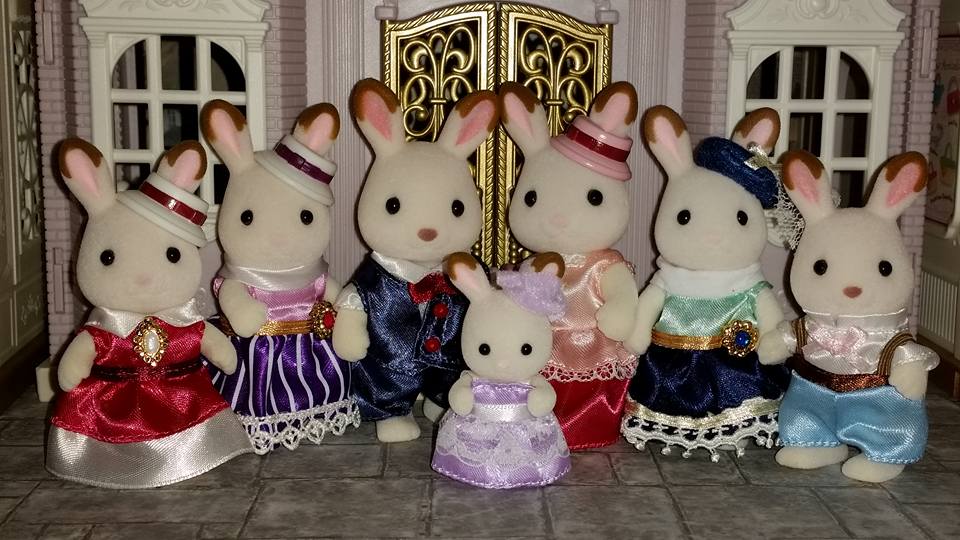 FATHER VALENTINE CHOCOLATE moved to the big town many years ago, when he first married his wife Belle. They first lived in a small apartment above the Pizza Shop, before moving to a lovely large townhouse as their family expanded with the birth of their eldest daughters, Stella and Victoria. In his spare time, he likes visiting his brothers, Frasier and Reece, in the Sylvanian Village, just for a quiet rest!

MOTHER BELLE CHOCOLATE is the manager of the Grand Department Store. A job which she really enjoys, but keeps her very busy, as she is overseeing all the small shops in the store. She always likes to see how her daughters' boutique is doing, but also uses it as an excuse to treat herself to a new outfit!

OLDER SISTER STELLA CHOCOLATE works in town and designs beautiful dresses that can be worn for special occasions. She uses birthstones to make exclusive, personalised dresses for her customers so that they feel extra special. Stella Chocolate has turned her scrapbook drawings into reality - her dresses are now sold at the Grand Department Store, her dream since she was little!

OLDER SISTER VICTORIA CHOCOLATE works in the boutique in the Grand Department Store, selling her sister, Stella's beautiful dress designs. It is a perfect partnership, Stella designs all the outfits, while Stella sells them to the general public!

BROTHER KLEIN CHOCOLATE is hoping to be a fashion designer like his older sister, Stella, when he is older. He is often scribbling designs in his art book, designing gorgeous suits and shirts. As a special treat at Christmas, his sister Stella created one of Klein's suits, as a special present for him.

SISTER ELLE CHOCOLATE loves going for rides across town on the tram. She will often sit with tram driver Theodore Maple, watching the scenery go by and chat about tram driving. She has decided when she grows up, she wants to be a tram driver!

BABY SISTER  MAY CHOCOLATE loves splashing about in muddy puddles whenever it rains. It drives her parents mad, as she is always wearing her best dresses when she does this! 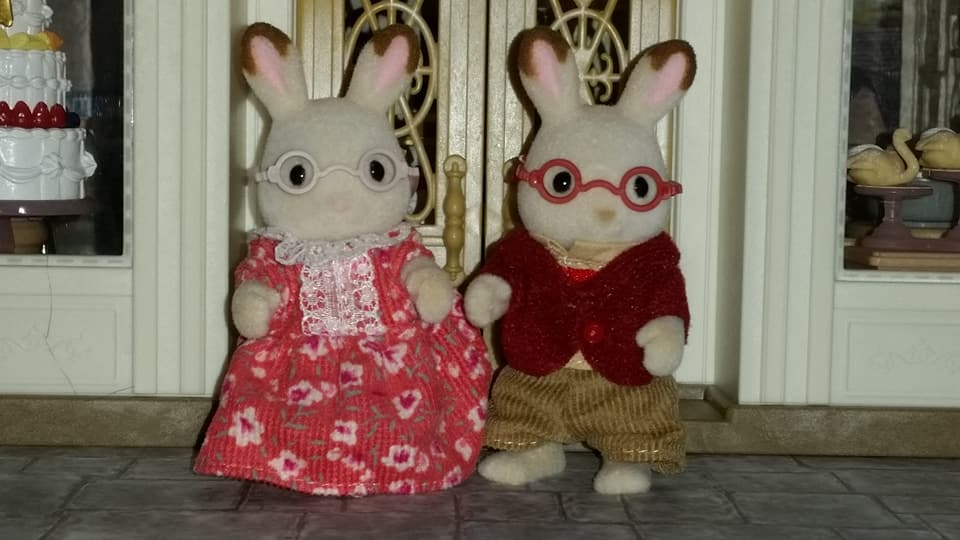 GRANDFATHER RHYS CHOCOLATE has a sweet tooth for crystalised fruit. His wife Patricia is really good at turning all kinds of fruit into jars full of sticky delights. Rhys therefore spends hours every day searching for new foods for his wife to preserve and bottle.

GRANDMOTHER PATRICIA CHOCOLATE when she was younger she loved to share out the cooking and food preparation tasks with her now grown up children. These cooking lessons in her old kitchen lead to her son, Frasier becoming a confectioner when he grew up and a very good confectioner he is!

The Chocolate Rabbit Family were first released into the Sylvanian Families range in Japan in 2007, with a UK release the following year. Since their release, it could be said that the Chocolate Rabbits have changed the face of Sylvanian Families. Freya is now the face of Sylvanian Families, and also became the club membership figure, taking over from Belinda Brighteyes when EPOCH took over the Sylvanian Fan Club. There have been many variations of Freya released over the years, she can often be found in many gift sets of buildings or accessory sets, wearing an exclusive outfit. You can read about some of the different Freyas released under the costume section of my site. An older sister figure was released in Japan as an exclusive to the club, coming with a walk-in wardrobe. She was also available in the UK, exclusive to the Sylvanian Families Shop in London. Grandparents were released into the UK range in 2012, with a different version released in Japan in 2014. The Japan version later got a UK release, replacing the original release. The biographies for the two different versions of the Chocolate Rabbit Family, are created by myself. As there have been so many variations of the family released, I have started making up relatives for them.
Powered by