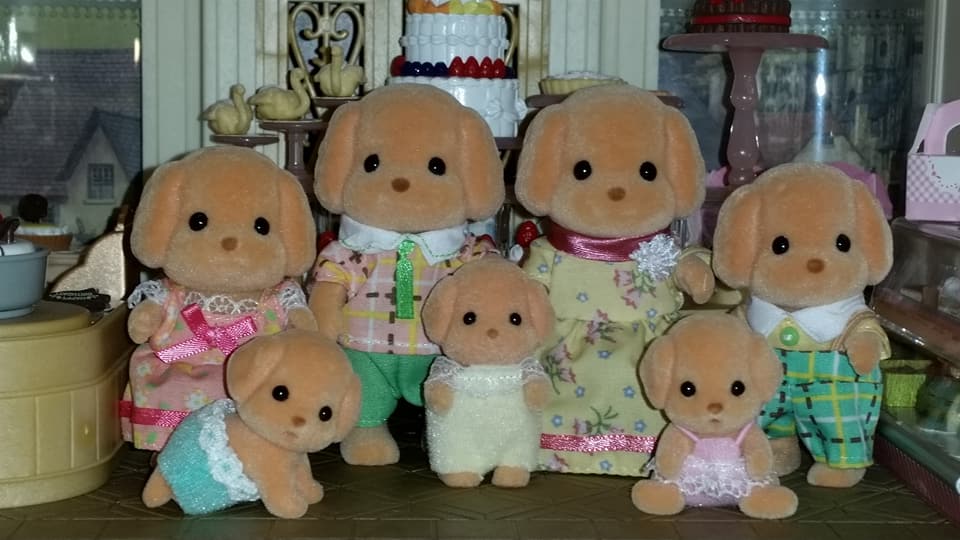 FATHER FRANK CAKEBREAD is good at sports. He's very generous about his hobby and always plays soccer or catch with the children in the village on weekends. The children also like Frank's clothes - whether he's wearing ordinary clothes or dressed for sports, he always wears a great outfit. On most other days, he is icing cakes with Melinda or playing catch with little Eric and his friends in the Sylvanian Village.

MOTHER VERONICA CAKEBREAD is the pastry chef at the Village Cake Shop. Everyone in the village loves her beautiful cakes with decorations that look like jewels. Whenever someone's birthday or another special occasion is coming, the villagers always go to her cake shop.

BROTHER ERIC CAKEBREAD is top of the class at school and is good at helping his friends when they don't understand something. Everyone goes to him for help because he knows just how to explain things so that people will understand. But sometimes he cares too much about his marks. When he doesn't get full marks in a test, he gets so disappointed that he runs home alone as soon as school is over.

SISTER MELINDA CAKEBREAD is an outgoing girl and makes friends very easily. She loves baking cakes; one day her mother made a new cake and invited all of the children around for a tea party. Melinda had so much fun that she's learning how to bake cakes from her mother so that she can have a tea party of her own.

BABY BROTHER MILO CAKEBREAD wants to do things by himself like a big boy. He loves it when his mother or nursery teacher praises him, so he proudly tells them whenever he manages to do something all by himself. But he likes some things about being a baby too - he loves napping in his mother's lap.

BABY SISTER MIA CAKEBREAD smiles at everyone she meets. Even if she's in a place full of people she doesn't know, she plays as comfortably there as she does when she's at home. She can't wait to go to nursery where she can make lots of new friends.

BABY BROTHER MAX CAKEBREAD is a quiet baby. He's not fussy about his food and he doesn't get into any mischief. But he loves to move around. If his family turn their backs for one moment, he's crawled somewhere far away before they know it. His family are always amazed by how fast he can crawl away. 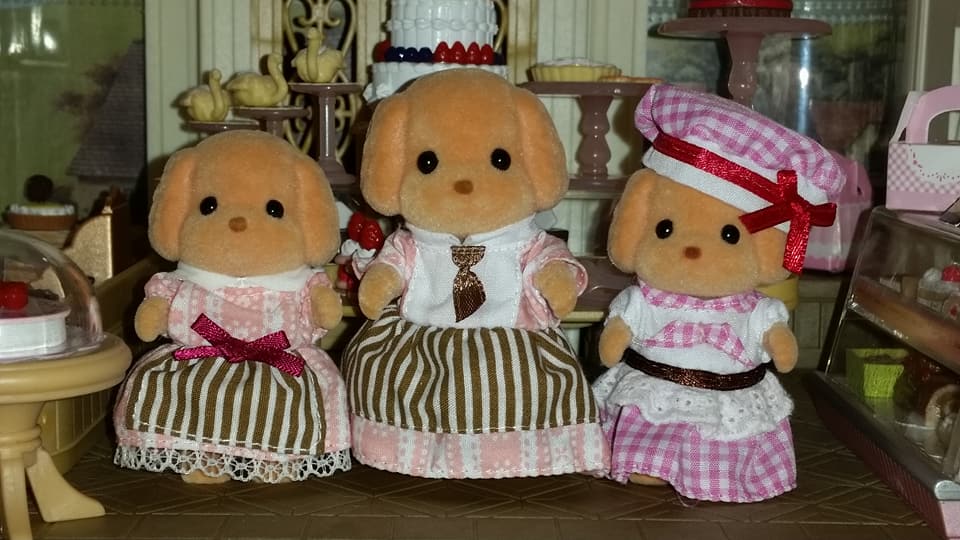 AUNTIE ROXANNE CAKEBREAD is also an expert pastry chef, just like her sister-in-law, Veronica. Together, they run the new cake shop which has just opened in the Sylvanian Village. While Veronica adds the exquisite detail to all the cakes, Roxanne makes the most delicious icing sugar you have ever tasted.

COUSIN MELODY CAKEBREAD is so excited about the family business opening in Sylvania that she wants to train as a baker too. Melody is practicing her cake making every day, and at the moment is trying to perfect her iced strawberry cake.

COUSIN MATILDA CAKEBREAD is the only member of the Cakebread family to not have much of a sweet tooth. As much she enjoys her families delicious sweet treats, she much prefers savoury food. She can bake a delicious cheese and vegetable pie, and her roast potatoes are a joy to taste. She has decided when she grows up, she will open a restaurant.


The Cakebread Toy Poodle Family were first introduced to the Sylvanian Families range in Japan in 2016, with a worldwide release the following year. An additional figure of the mother was included with the cake shop, while a variation of the sister came with a cake decorating set. For UK members of the Sylvanian Families fan club, an exclusive version of the sister wearing a pink chequered outfit was offered as a renewal figure. The three additional poodle figures I have created biographies for, and have classed them as part of the extended family. In 2017, an older sister was released into the range, with chocolate tips on her ears.
Powered by