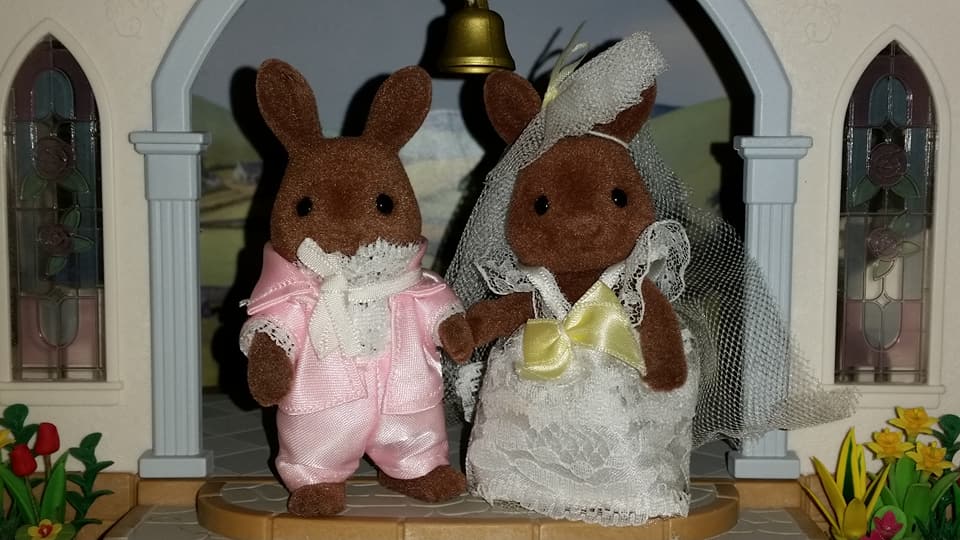 The romantic tale of how this lovely couple first met and fell in love goes back to a photography competition being run in 'The Sylvanian Times'. Lilly was an aspiring young photographer at the time, and entered a competition with one of her pictures. She was not expecting to win, but hoped her picture would get printed in the paper. Hickory was working at the paper at the time, training to be a journalist, and his first job was to interview the winner. Lilly was quite surprised at the time, when she opened her door and her eyes fell on Hickory. She tells everyone it was like her heart skipped a beat! Hickory was quite flustered as well, and kept stumbling over his questions. After the interview, Hickory typed up his story and kept thinking of Lilly. He decided to write her a letter asking her out on a date, but he was so flustered that he licked what he thought was the letter and posted the stamp! When Lilly went to read her interview in the paper, instead she found that the article was the letter Hickory had written for her and meant to send. She was so flattered she ran all the way from the newsagents to the newspaper offices, where she burst through the doors shouting 'Yes, Yes, Yes'!! It certainly gave Cameron Moss his next story.

One date led to another, and before anyone knew it, Hickory and Lilly were engaged. It was such a romantic story, and Hickory recorded each date in a weekly column in the newspaper, as the readers had been desperate to know what had happened after his letter asking Lilly on a date was published. Once the big day arrived, it felt like the whole of the village had arrived at the church to watch the two lovebirds exchange vows.

The Windward Rabbit Wedding set was one of the original four wedding sets released into the UK Sylvanian Family range when they launched in the UK in 1987. The rabbits are part of the Wildwood Rabbit Family. They had a short life in the range, like the Sweetwater Wedding set. In the Sylvanian Families annual, it is claimed that the Sweetwaters and Windwards were best friends and had a double wedding ceremony.
Powered by