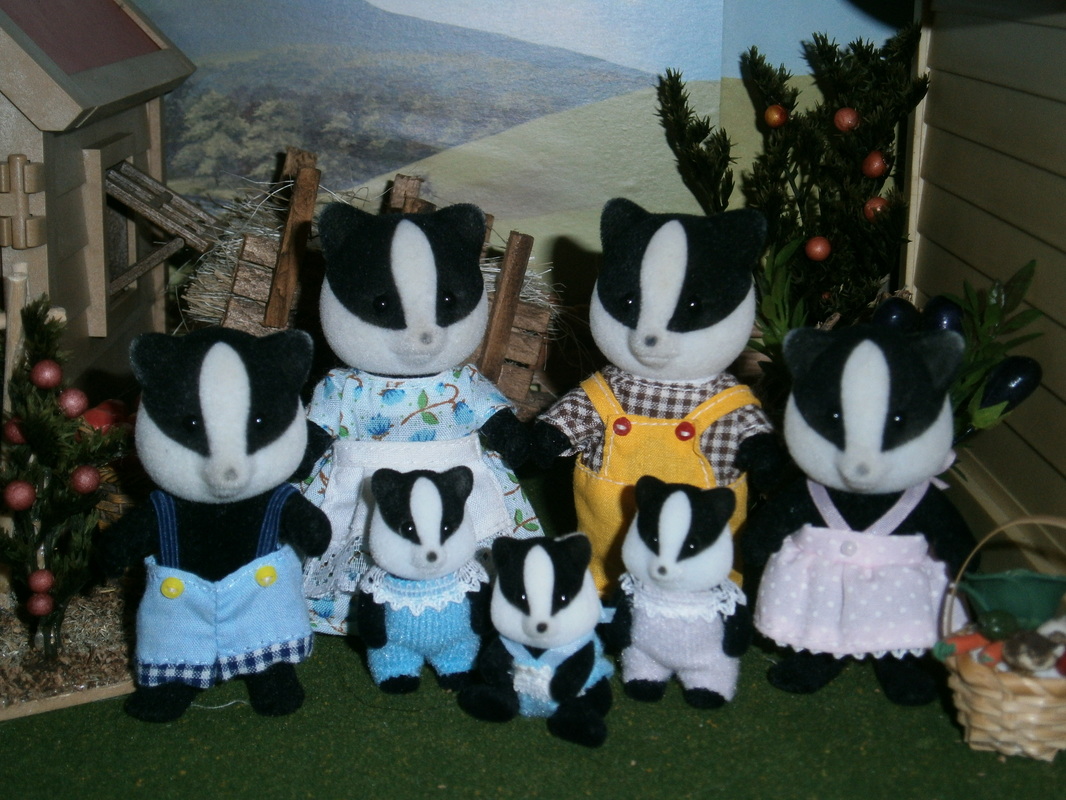 FATHER BENJAMIN UNDERWOOD and his family are the 'wandering nomads' of Sylvania and never like to plan anything in life. They are always turning up unexpectedly in their caravan to see whether their friends are at home and are never in the same place all the time.
However, Benjamin is always welcome because he is an expert at mending broken furniture and putting up shelves. To improve his woodwork skills, Benjamin has attended night school classes, run by Wade Waters, and after many months he perfected the art of furniture restoration, and is now known throughout Sylvania as an expert with a hammer and chisel. He is also famous for his knowledge on antique furniture and is often called upon to verify the authenticity of newly acquired Sylvanian antique furniture. Benjamin is currently writing a book called, 'Antiques, the Underwood Way', but never seems to get around to finishing it! As you can imagine, after all of his hard work he has very little time for relaxation, but when he does find time his greatest joy is to be with his wife and children.

MOTHER BEATRIX UNDERWOOD is a very capable badger indeed, and can often be seen on a clear day driving her caravan around Sylvania. Her father had always inspired her with his motoring stories and so from a very young age, Beatrix became interested in the mechanics of any vehicle with wheels. In fact only last week she enrolled herself for advance car mechanic evening classes, to keep her busy while Benjamin is writing his book. Beatrix knows how to look after animals and is very aware that it is most important to look after her faithful Bramble, who pulls the caravan and without hesitation, she keeps him in the best condition at all times. With such a busy life Beatrix makes a special effort to make time with her children and insists that at least once a week they all have supper together so they can discuss their problems and exchange stories.

BROTHER BYRON UNDERWOOD is Benjamin and Beatrix's oldest son, and as you can imagine having such talented parents means he has a lot to live up to, but he takes after his other grandfather who was the Sylvanian society photographer of his day and had taken pictures of all the most impressive weddings and christenings in Sylvania. Byron has recently been learning to develop his own film and if you can't find him it is because he is in his dark room developing his latest roll of film. His photo album is the most popular book in Sylvania as all his friends want to come round and look at pictures of themselves. Unfortunately his photography has been taking up rather a lot of his time recently and his school work has begun to suffer, especially mathematics. But Mr Merryweather has been giving him some extra tuition, which has helped him to catch up with his multiplication and division.

SISTER BESS UNDERWOOD is friends with all the girls in Sylvania and likes to keep everyone up to date with all the news between the families. She is known for her striking features, and her beauty is the talk of Sylvania. Everyone says the reason she is so attractive is because she has a friendly personality which shines through her beautifully slanted eyes. Bess has also been a model for Byron when he was taking some fashion photos for the Sylvanian newspaper. Bess was thrilled to get the opportunity to wear so many different and exciting outfits, but her mother Beatrix makes quite sure she keeps her feet firmly on the ground and of course her school work comes before her modelling at all times.

BABY SISTER ELLA UNDERWOOD's personality is still developing, but so far she is showing signs of being a great thinker and just loves to sit on the caravan and watch the world go by as they travel around Sylvania. Unlike most babies of her age she is always quiet and content, and appears very much at peace with the world, which pleases her parents greatly.

BABY BROTHER HUGH UNDERWOOD has already made his mark on Sylvania and is showing a great interest in the construction of buildings, Bess thinks they may have a possible architect in the making, though it is a little early to be sure. He is constantly creating all sorts of developments and is working on improving his talents with his brightly coloured building bricks he was given for his birthday. Though more boisterous than his sister, he is also a very contented baby and will play for hours remaking each of his brick built creations until they are just right.

BABY SISTER APRIL UNDERWOOD loves to clean and tidy, unlike all the other members of her untypical family. Not that April's efforts make much difference to the untidy Underwood household. After all she is only small and can't quite reach to clean and tidy much above chair level. Her favourite 'toy' is a big feather duster! 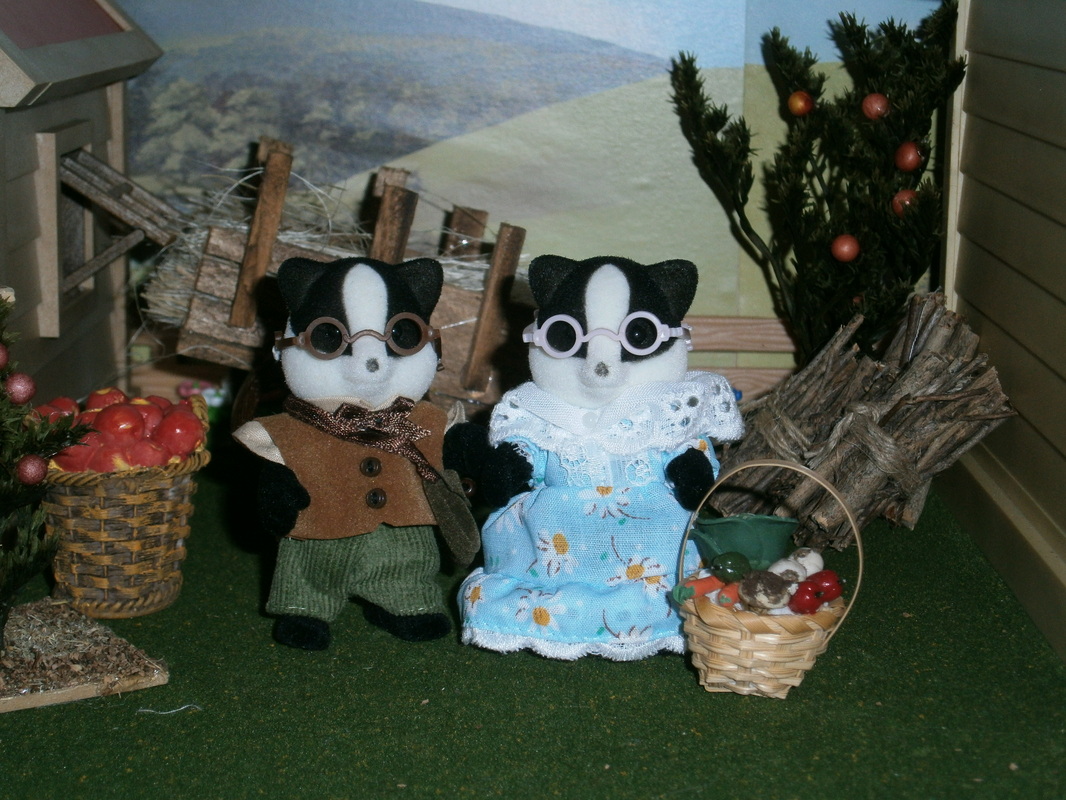 GRANDFATHER PATRICK UNDERWOOD is now very old but has wonderful memories of being the most famous photographer in Sylvania. For some strange reason, nobody ever calls him by his proper name, he is known to everyone as Lionel! He loves it when his grandson, Byron, joins him to learn the tricks of the trade.

GRANDMOTHER MILDRED UNDERWOOD is a most untypical grandmother who just doesn't like cooking, knitting or gardening. She loves joining in with the younger Sylvanians when they go hiking and once even went potholing. Sometimes the youngsters would rather be by themselves, but she badgers them into submission and usually gets invited along! 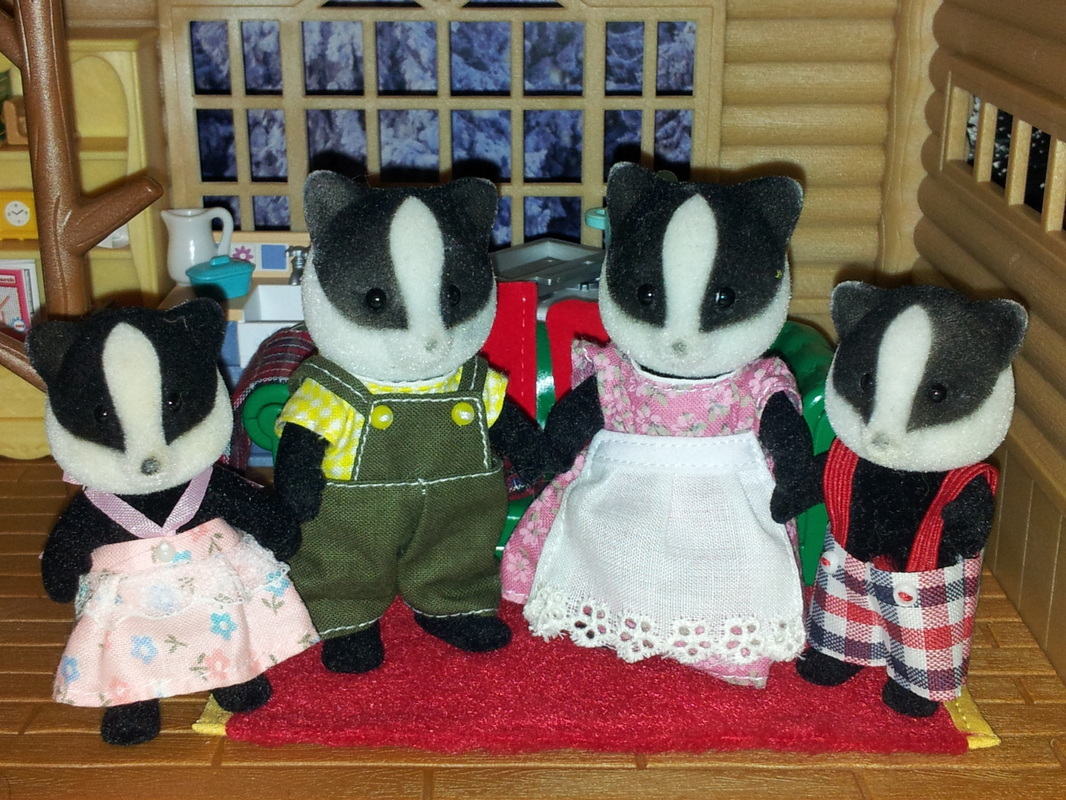 FATHER GEORGE UNDERWOOD, unlike his parents or his brother, Benjamin, is very well organised. He likes to plan his entire week every Sunday evening, so he knows where he will be and what he will be doing each week. He runs the Sylvanian antique shop, which comes in handy as he can always calls upon his brother to look over all his new acquirements. His family live in a cottage in the village, as he likes to know where he will wake up each day!

MOTHER PETRA UNDERWOOD loves to paint, but not paint pictures, she loves painting the house. She always seems to be redecorating the family household. She always starts with the living room and works her way through the house. By the time she has finished the last room she says it is time to start again. It usually takes her a year to get through the whole house!

BROTHER TOBY UNDERWOOD loves to go for long hikes in the Sylvanian countryside. He often takes a packed lunch and will be gone for the whole day. His grandmother Mildred loves accompanying him, and often states 'It's adventure Time!' His favourite time of the year is autumn as all the leaves change to a red colour and are falling off the trees, giving him breathtaking views to take in.

SISTER MELANIE UNDERWOOD is the brains of her entire family. She can often work out large mathematical equations in seconds. Whenever her father is typing numbers into a calculator she can give him the answer before the calculator. Her father often lets her deal with the accounts for his antique shop, as she will always tell him off if he spends too much on a new item of furniture for the shop. 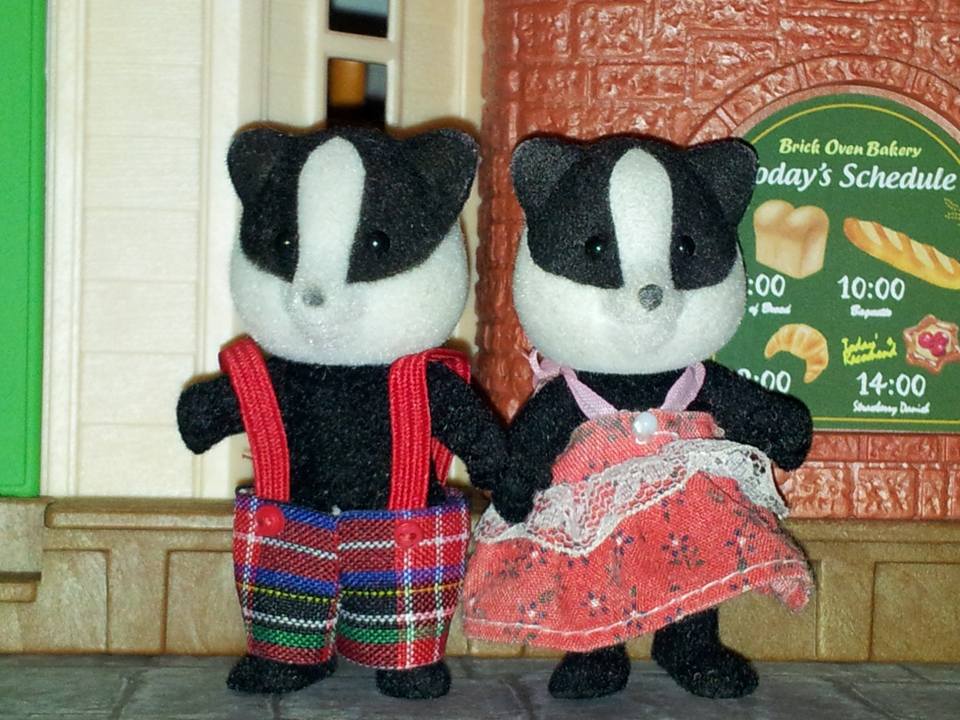 COUSIN MARTIN UNDERWOOD loves the smell of freshly baked bread, which is why, in the mornings you will see him cycling around Sylvania visiting each of the bakeries. All the bakers in the village know him by now, and each day a different baker always has a freshly baked roll with a lashing of butter waiting for him!

COUSIN SALLY UNDERWOOD loves to spend time in her Uncle George's antique shop. She loves all things old and is fascinated by some of the items he has in his shop. She is hoping when she is older that she can go and work with her uncle in his shop.

The Underwood Badger family were first released into the UK range in 1989, as a family of six (with no grandparent figures). There was a caravan released at the same time, which was their home. The family was re-released in 2004 by Flair, who gave them all different clothes. Their caravan was also given a revamp. It was originally a red colour, but the new release was a more brown wooden colour. It also had more space for the family to live in. The grandparent figures were originally released in a building, as exclusive figures, making them very hard to get. The family was then re-released in 2012 as a 'Celebration' family set of seven figures, which included the grandparent figures. The clothing on the celebration set was the same as the 2004 re-release of the family, although the baby was in a red outfit, compared to the previous blue and pink outfits. The Underwood family have the privilege of being the last 'Celebration' family set released by Flair, as EPOCH took over the distribution of Sylvanian Families after their release.
Powered by