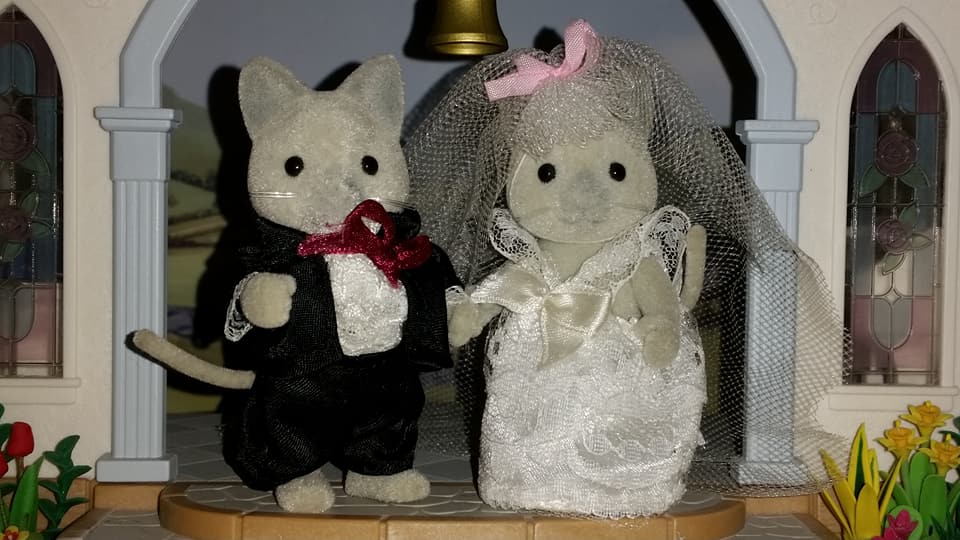 "It's a marriage made in heaven" predicted Humphrey's star gazing uncle, Ferdinand. And he was right. Humphrey and Prunella fell madly in love the very moment they laid eyes on each other. That first fateful meeting was actually a blind date which their friends had arranged for them at the romantic Harvester Restaurant. And because they had never met before, Humphrey had to wear a red carnation in his buttonhole and Prunella had to wear a red carnation in her hair so they would recognise each other. And when Humphrey saw Prunella walk into that restaurant looking all shy and pretty with the flower in her hair, he knew he'd found the girl of his dreams.

From that fateful day the two of them were inseparable and it wasn't long before Humphrey took Prunella back to the Harvester for a special surprise dinner, got down on one knee and asked the magic question: "will you marry me?" To which the blushing Prunella said "yes!" (at least six times because she was so very excited and happy!)

The wedding preparations were soon underway. The happy couple asked Uncle Ferdinand's children Zara and Zack Solitaire if they would be their Bridesmaid and Pageboy.

In all the excitement of preparing for the wedding, time seemed to race by and before you could say "I love you more than anything else in the world" the big day had arrived.


The Solitaire Siamese Cat Wedding set was released into the UK range of Sylvanian Families in 1996. It was the biggest wedding set released in the UK, at that time and came in a box with the Bride and Groom, Bridesmaid and Pageboy, and several other accessories. The set also included a large wedding arch, a working piano (which played 'Here comes the Bride'), a Wedding cake, a table and chairs, a camera, photographs and presents. It is quite a hard set to find these days. I found mine on E-Bay, but sold the accessories as I already had several wedding items from other sets.
Powered by