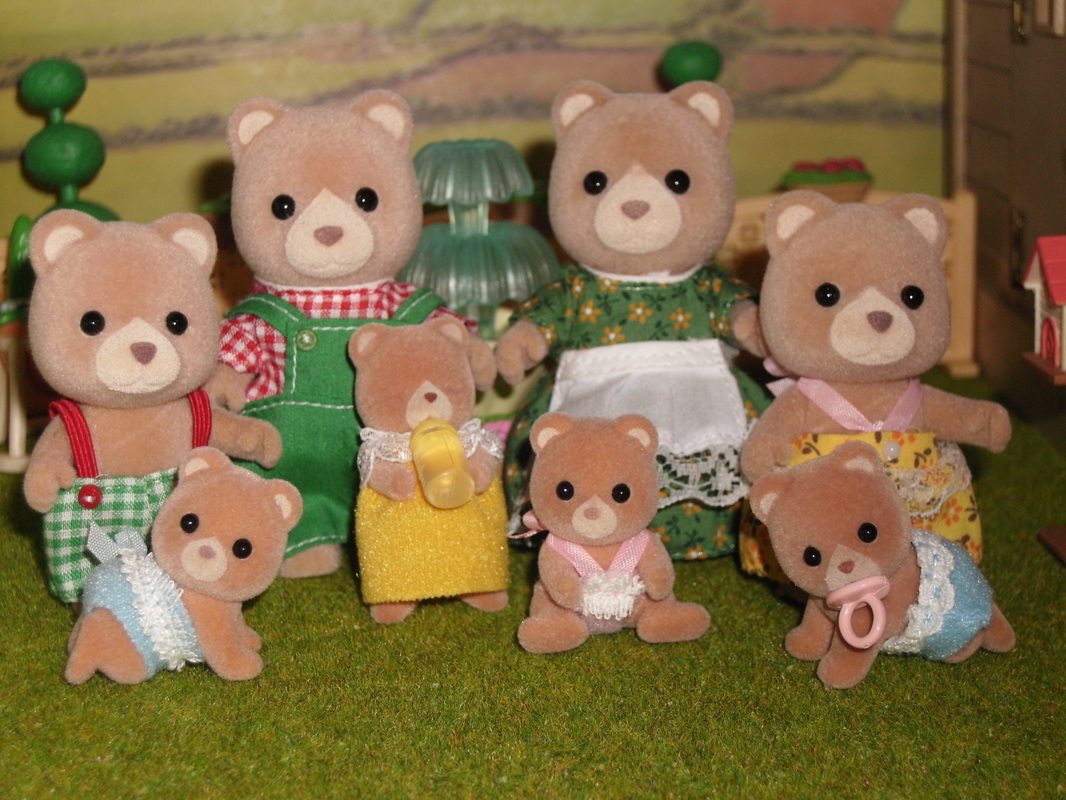 FATHER PATRICK PETITE spends all his time in the attic gazing through his telescope at the stars at night, dreaming of all the extra-terrestrial Sylvanians in other worlds.

MOTHER MARGARET PETITE known to her friends as Meg, thinks that Patrick gets too carried away with his stargazing. She much prefers the mystery of astrology to astronomy.

BROTHER PIERS PETITE wants to be an astronaut when he grows up and is always designing and building new toy rockets.

SISTER ANDROMEDA PETITE enjoys both her parents’ hobbies. She always reads her horoscope written by her mother in the local newspaper.

TWIN BABIES FREDDY AND HALLEY PETITE’s favourite toy is the mobile of the planets hanging over their cot, the first present from their father Patrick.

TWIN BABIES CARLA AND GEORGIE PETITE are often scrapping with each other. If they are left alone for more than twenty minutes they will start squealing at each other and throwing their toys at each other! 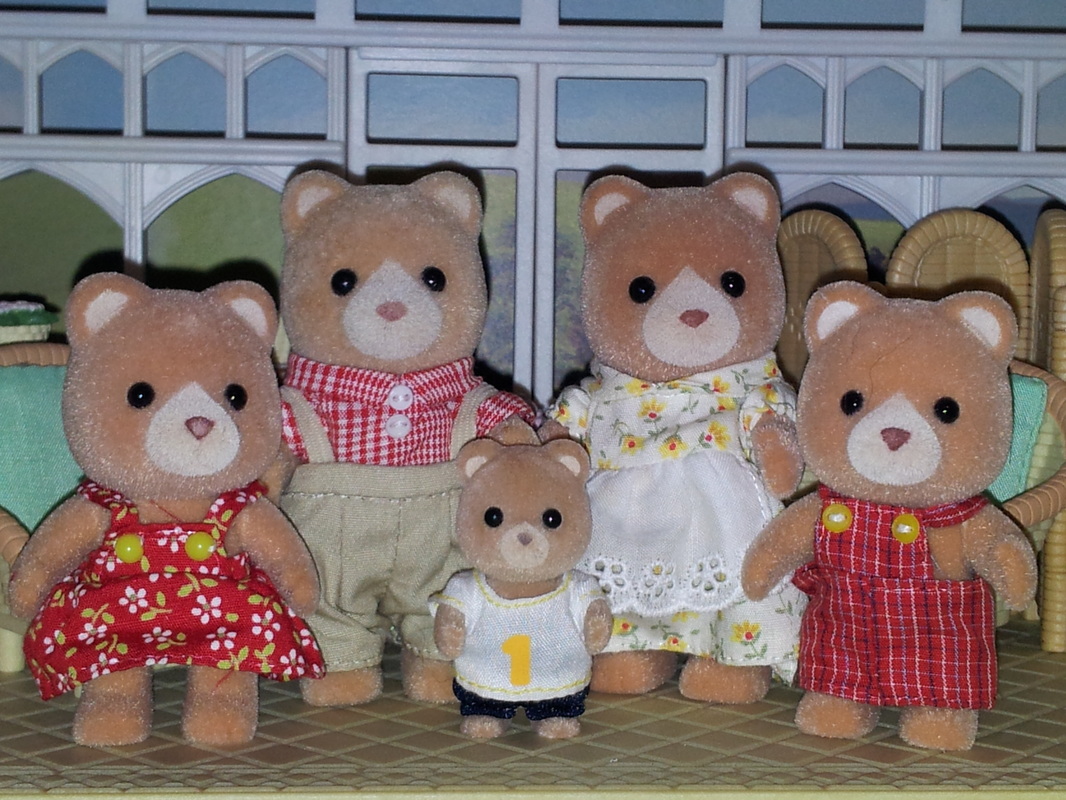 FATHER PERCY PETITE has become an expert at sweet making. It all happened by accident, one evening he was attempting to make a sauce to go with the family dessert, and ended up making toffee. Since then he has practiced and followed recipees and now makes sweets for the local sweet shop.

MOTHER ANTONIA PETITE is a very social lady, and loves meeting up in the Blackcurrant Cafe with the other mothers in Sylvania every morning once all the children have gone to school. If she is not catching up on all the latest gossip, she is busy planning social events in the village.

BROTHER JAMIE PETITE is a very thoughtful and quiet young boy. He is a very good poet and can often be found writing poems under the large oak tree at the end of his garden, which he says gives him inspiration.

SISTER MIMI PETITE takes after her mother in being very social. During every break in school she gathers with her friends to catch up on all the latest events and goings on. Like her mother she also likes to plan events for herself and all of her friends.

BABY BROTHER JOSEPH PETITE is a very chatty baby, unfortunately he is still learning to speak, so most of the time all that comes out of his mouth is gurgle sounds. His brother Jamie seems to understand him though, and often has long conversations with him. 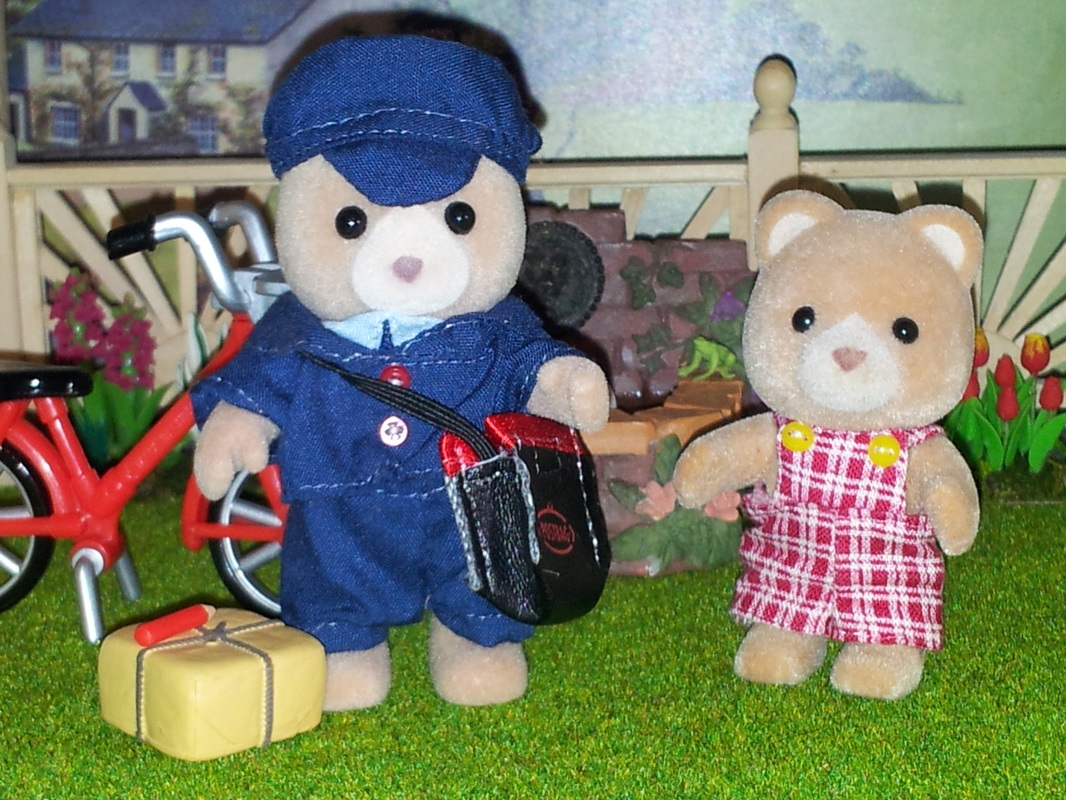 UNCLE PETE PETITE is a postman in the Sylvanian Village, working closely with his good friend Samuel Stamp and the new postman Billy Brightfield. He can be seen every day on his bicycle, cycling around the village delivering the post and collecting the post from the post boxes. Everybody in the village knows him, and often hear his cheerful whistle as he cycles along.

COUSIN MICHAEL PETITE is Pete's son, and hopes to follow in his father's footsteps one day in becoming a postman. On Saturday mornings he can often be found in the post office, helping in the sorting room, by separating post which must leave the village and sorting it into destinations.


The Petite Bear family were the first new family released under Flair into the UK in 1999, having been released into the Japan range the previous year. They were the first bear family to use a new mould, the previous bear families having all used the big bear mould, whereas the Petite family used a new, smaller mould, hence the name 'Petite' and also the start of a new sized bear family. The family had a second release in Japan a few years later, this time wearing new outfits. The outfits on the second release would get released on the Porridge Bear family in the UK, a bear family which looked almost the same as the Petites, with just slightly different facial markings. When EPOCH took over the distribution of Sylvanian Families into the UK, they released a new bear family with the name of Petite, with the same names as the original line up. This family had different biographies and also looked completely different. Flair had originally released the parent figures under the Osbourne name of the new Petites, which is where you will find out information about the new release.