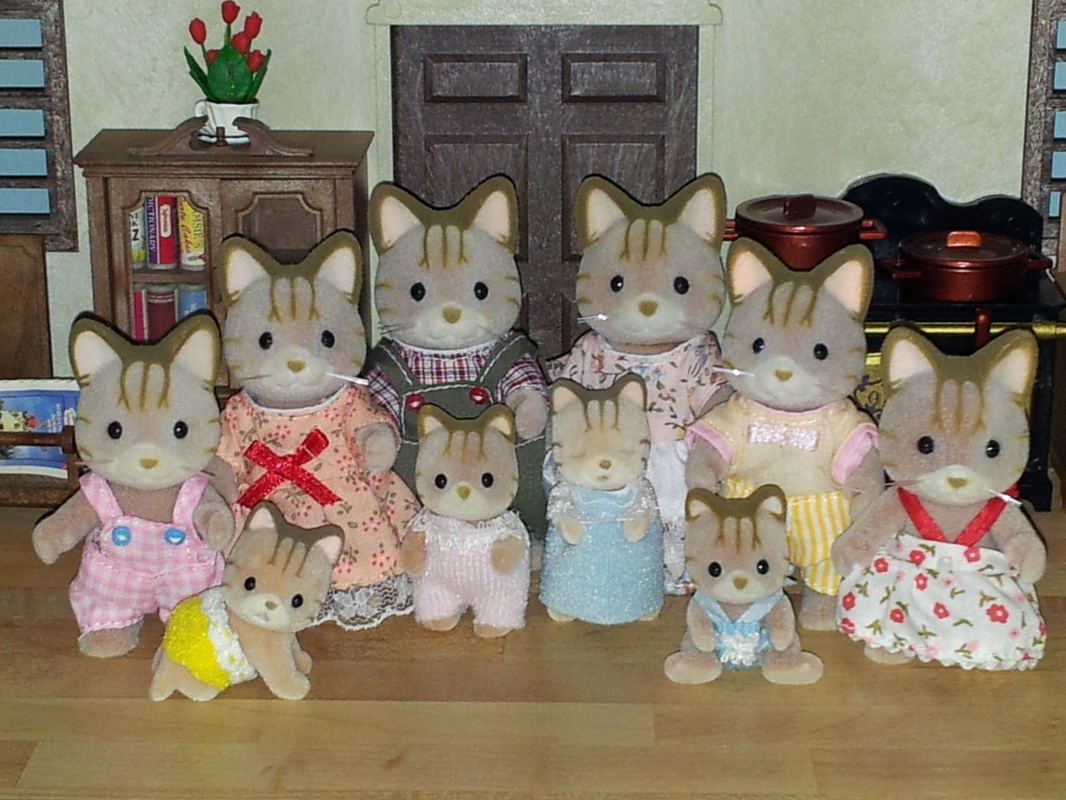 FATHER ALONZO MACAVITY as a child, wanted to be a dentist, but hated the sound of the dentist's drill. Strange that he has ended up being the master builder in Sylvania.

MOTHER CASSANDRA MACAVITY is a bit of a stargazer and loves looking into the future. At the moment she is trying to 'see' what she will be making for the families' dinner tonight!

OLDER BROTHER MISTOFFELEES MACAVITY has spent his youth practising magical conjuring tricks which he now enthralls his younger brothers and sisters with. They all just love his 'now you see it, now you don't' as the vase of flowers disappears into thin air!

OLDER SISTER GRIZABELLA MACAVITY takes pride in her appearance, always dressed and groomed to perfection. She lists among her favourite things, clothes shopping, visiting the beauty salon and catching up on her beauty sleep.

BROTHER RUMPUS MACAVITY when allowed, loves helping his father. However he is very mischievous and once actually got stuck in a cavity wall that his father was building.

SISTER ASPARAGUS MACAVITY has been taking cookery lessons and would like to end up being a master chef. She has read all the best books on cookery and is now giving her mother useful tips!

BABY SISTER SKIMBLE MACAVITY loves chattering away to herself. However at her young age, nobody can understand quite what she is saying!

BABY BROTHER ETCETERA MACAVITY is a very creative little boy and loves playing with the building bricks that his father bought him. But sometimes he can be naughty and throws them around the room!

BABY SISTER ELECTRA MACAVITY likes to cuddle up with her mother, but if mum's busy she'll find a cosy sunny spot to have a sleep in. Electra only comes to life when it's time to eat!

BABY BROTHER SCRAMBLE MACAVITY is always chewing on something. His mother is unsure if it is because he is always hungry or teething! He certainly enjoys his food, and always looks for seconds when his plate is cleared. 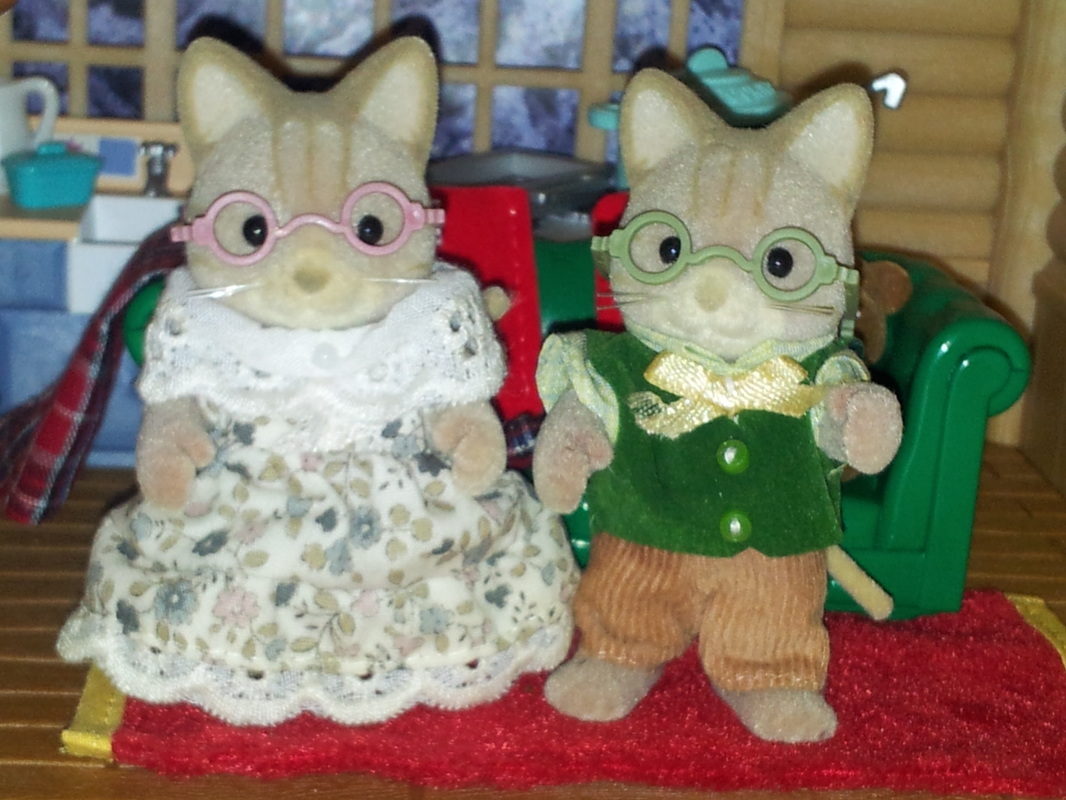 GRANDFATHER LEO MACAVITY's full name is Leonard, but for as long as he can remember everyone has always called him Leo. If Laurette ever calls him Leonard, he's usually in trouble as she only uses his full name when she's being stern with him! Leo's favourite pastime is playing chess and you can find him on a sunny afternoon sitting outside in the park enjoying a game of outdoor chess with one of his friends.

GRANDMOTHER LAURETTE MACAVITY met Leo during a chess tournament while they were still at school. Laurette is a very logical thinker and was always the only person who could beat Leo in a chess match. Laurette became an architect and it was seeing all the models and plans in her study at home that inspired her son Alonzo to become a builder. Laurette still designs buildings, but now small Dolls Houses for her grandchildren, which are then built by the very talented Cuthbert Porridge. 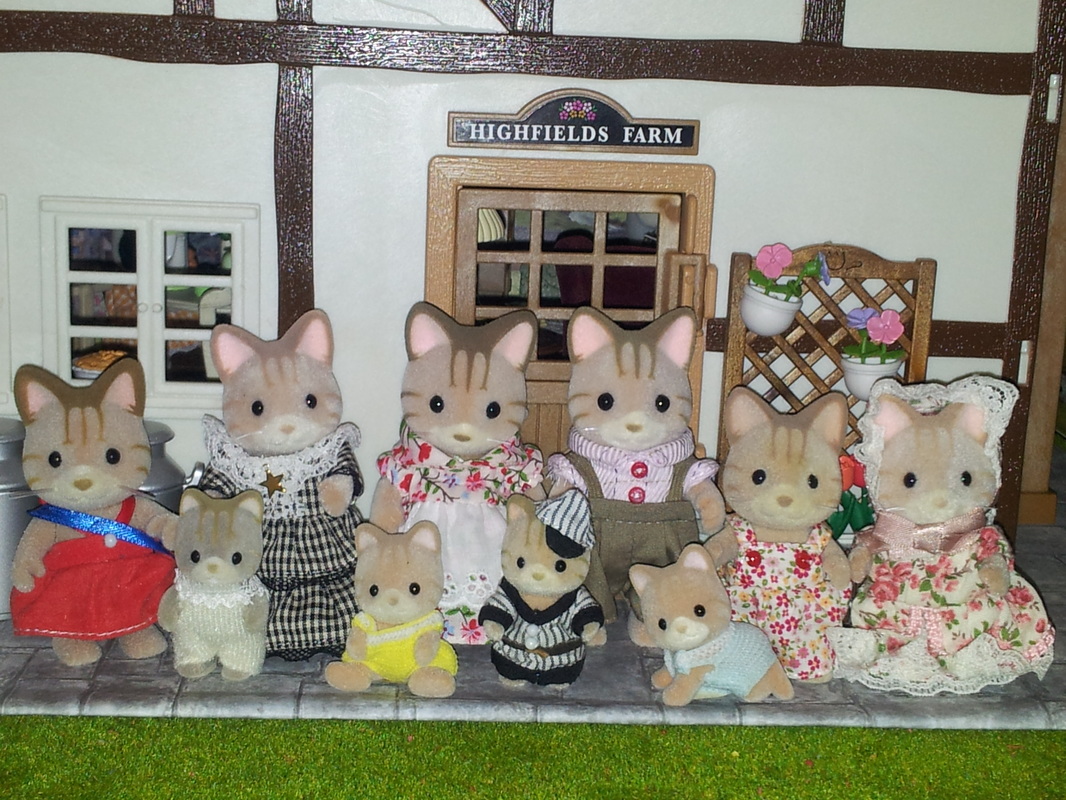 FATHER WILBERT MACAVITY takes after his parents, and loves a good game of chess. Over the years he has improved his game quite a bit. One day he aims to beat his parents in a tournament. He has come close to beating them, but they always seem to win.

MOTHER CARAMEL MACAVITY loves to curl up with a nice cup of tea and a good book whenever she gets some spare time, which is not very often in her busy household! With eight children she sometimes wonders how she manages to get anything done.

OLDER SISTER STAR MACAVITY is a budding fashion designer. She is studying in college and hopes to open a boutique in the future. In her spare time, you will find her visiting the various fashion outlets in the village to see what the latest trends are. She has already designed some contemporary outfits for her sister Victoria.

SISTER YVONNE MACAVITY is a very studious young lady. Whenever she gets home from school she gets stuck into her homework and will not leave her room until it is all complete. Her parents often check her room to make sure she is still there as she is so quiet from engrossing herself into her studies!

SISTER YVETTE MACAVITY is very tidy. She likes to have everything in her room organised and in a certain place. She has all her books in alpabetical order, her dresses all arranged by colour and season, even her pens and pencils for school are all organised by colour and size!

SISTER VICTORIA MACAVITY is a hopeless romantic, often fantasising about the olden days and how different life was back in the past. Her favourite era is the 'Victorian Era', and you can often see her dressed in a Victorian outfit pretending she is a lady from a different time.

BABY TWINS AVRIL AND PEACHES MACAVITY are a very noisy young pair, and can often be heard before being seen! It's not that they are naughty, they are just extremely loud. Their father expects it is because they have so many sisters to contend with that they want to be noticed!

BABY BROTHER ALFIE MACAVITY sometimes feels stifled, growing up in a household full of females. He often looks at his father and wonders how he has coped all these years with the constant fights for the bathroom! He would like a baby brother, but his mother Caramel feels eight children is enough for any household!

BABY SISTER GILLY MACAVITY loves playing with her new dolls house, which her grandmother Laurette designed for her. She can get transfixed for hours, playing with miniature figures of her family and putting them in the different rooms of the toy house. 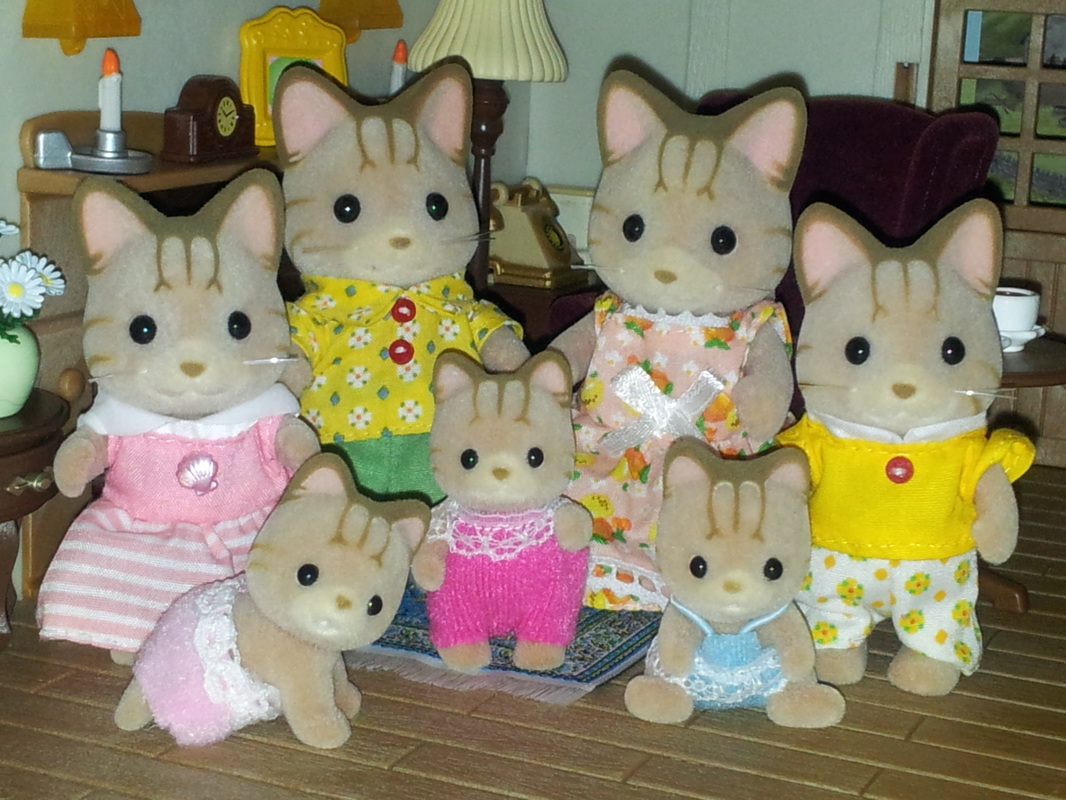 FATHER SIMON SANDY is sporty, and especially enjoys marine sports. Whenever he has time, he takes his family to spend time at their summer house by the seaside. In summer, he teaches marine sports to groups of children from the Sylvanian Village at the Sea Breeze Cape.

MOTHER AMELIA SANDY likes fruits very much – even her favourite clothes have fruit patterns! She occasionally goes fruit picking and makes delicious meals and desserts with her freshly picked fruits. Her homemade fruit ice cream is her children's favourite.

BROTHER SHANE SANDY is very brave and wants to be an explorer when he grows up. He likes to play exploring on Adventure Island with his friends. He sometimes worries his parents by climbing up tall trees and going into dark caves.

SISTER SABRINA SANDY is an active girl who loves to ride her bicycle while enjoying the beautiful scenery of the Sea Breeze Cape. When she stays at the Sea Breeze Cape, she exchanges letters with her good friend Freya Chocolate. She and Freya have pretty pink shell brooches that match. Sabrina's friendship brooch is very special to her.

BABY SISTER APRICOT SANDY is a crybaby and believes that it rains when she cries. So whenever she wants the weather to be sunny, she tries to hold back her tears even when she falls down on the street or drops her snack on the floor.

BABY BROTHER SCOTT SANDY is very active. Even when he's riding in his stroller, he leans forward and wiggles his arms and legs. He loves the fluffy ears the rabbit families have, so his mother Amelia made him a straw hat with long ears. It's his favourite thing!

BABY SISTER SKYLER SANDY is a friendly girl who smiles and waves at people she meets on the street. Her mother Amelia made her a straw hat with long ears like a rabbit. Skyler likes it so much that she insists on wearing it even in the house. 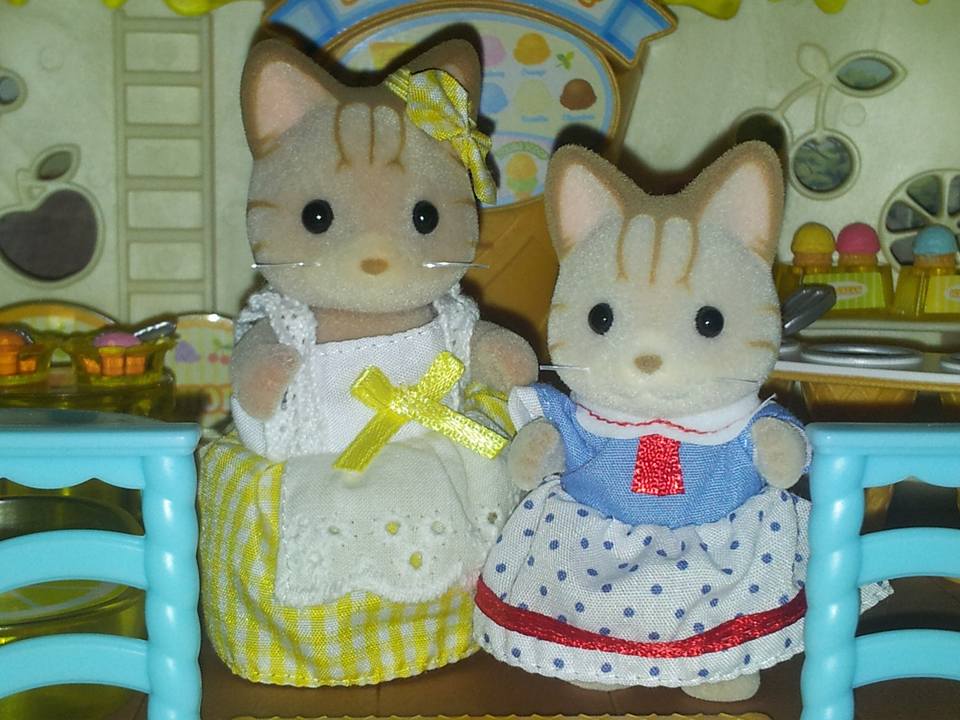 AUNTIE ALICIA SANDY runs the Ice Cream Shop at Sea-Breeze Cape, where she sells her delicious home-made ice creams throughout the year. Alicia has been making ice cream ever since she was a little girl, and over the years has perfected her art. Her favourite flavour to make is Blackberry Cream, which has a very bright purple colour once finished.

COUSIN LUCY SANDY can often be found during the school holidays helping in her mother's shop. She wants to open her own shop when she is older, selling delicious cakes. She often says to her mother, that helping in the shop is good practice for when she has her own shop! When she isn't helping in the shop, Lucy can be found walking along the beach with her cousin, Sabrina, looking for seashells to make jewellery from. 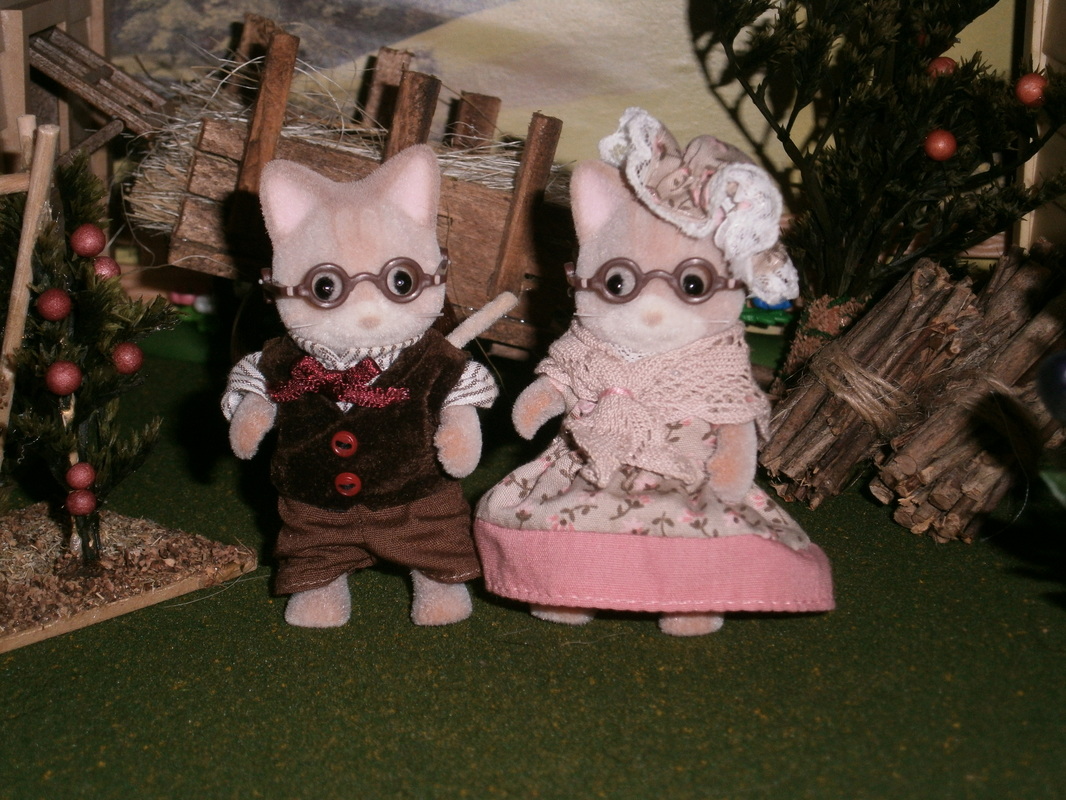 GRANDFATHER CECIL SANDY is a very active gentleman, and can often be seen walking through the Sylvanian Village or countryside with his wife Celia. When it is summer, they enjoy going fruit picking in the countryside.

GRANDMOTHER CELIA SANDY is also active like her husband, and is often seen walking about with him. Her favourite part of the walk though, is persuading him to stop at one of the many cafe's in the village for a nice warm drink and a slice of cake!

The Macavity Cat family were first introduced into the UK Sylvanian range by Flair in 2002, having previously been released in Japan around the new Millenium. The grandparent figures were an exclusive to the UK collector's club, and were for members joining or renewing their membership. There were two versions of the grandparent figures released in Japan. The family were given a special re-release in 2011 as a 'celebration' family, introducing older siblings to the family in the UK (an older sister figure had previously been released in Japan). When EPOCH started the distribution of Sylvanian Families in the UK, they relaunched the Macavity family in all new outfits, and with a new name. They were now called the Sandy Cat family. In my village, I class Father Simon Sandy as Mother Cassandra Macavity's brother.