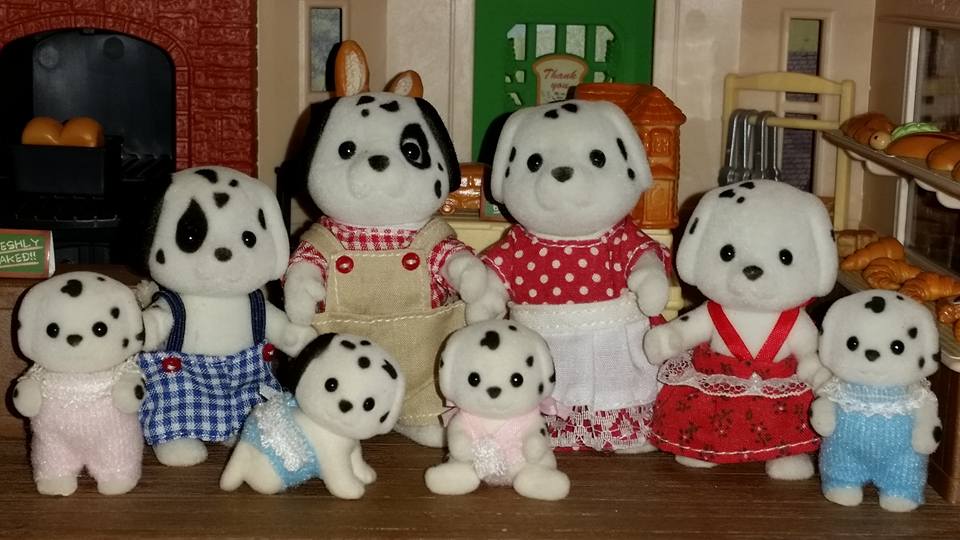 FATHER MONTGOMERY KENNELWOTH really enjoys doing his own decorating. He fully enjoys the boring bits, like sanding down the woodwork and stripping off the old wallpaper

MOTHER DOROTHY KENNELWORTH is a workaholic and loves to help Mongomery, if she’s not doing this she’s doing that. In fact she seems to be doing 101 things all at the same time.

SISTER CLARA KENNELWORTH is altogether more serious. She loves doing crosswords and lots of different competitions. But most of all, her favourite is the ‘Sylvanian Spot the Difference’ competition in the local paper.

BROTHER RUFUS KENNELWORTH is an easy-going, fun loving little boy. As everything seems so simple to him; his father says that "He sees everything in black and white".

TWIN BABIES DASH & DOT KENNELWORTH as you will agree have very strange names. When they are naughty, their father Montgomery, who used to be a boy scout, calls out to Dorothy, "Dot, Dot, Dot – Dash, Dash, Dash – Dot, Dot, Dot", which is morse code for S.O.S. – help!

BABY BROTHER PONGO KENNELWORTH is quite a well behaved little boy. His parents usually find him curled up asleep in the corner, while his mischievous siblings are being naughty!

BABY SISTER PERDITA KENNELWORTH likes colouring in pictures with her crayons. She is quite artistic, and loves to draw pictures for her parents. Her proudest achievement was a large picture she crayoned on the wallpaper in her living room. She was quite upset when her mother told her off and then washed it off the wall!!