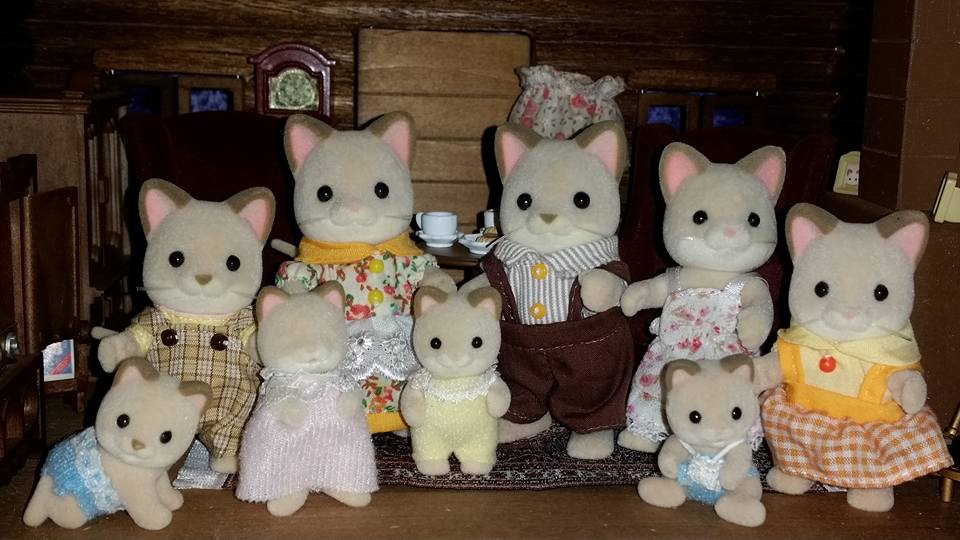 FATHER ROSSETTI LONGFELLOW KEATS, his delicate puff pastry creations are special treats. The Pastry Chef extraordinaire, he fills the kitchen with panache and flair. They say he’s a poet with flour and yeast, because those chocolate dainties are a feast.

MOTHER BRONTE KEATS runs the Patisserie like clockwork, hard graft she’s never known to shirk! Efficient she is in every way, she even has time to chat and play. To all her customers she is a friend, to all their whims she does attend.

OLDER SISTER ENID KEATS, an apprentice patissier, who into her creations, puts lots of care. Her specialty is an eclair filled with cream, all who eat it say it tastes like a dream!

BROTHER T S ELIOT KEATS, a name no one beats. The longest name of all, a real mouthful to call. So Bronte has shortened it a lot, from Tennyson Swift to TS Eliot.

SISTER SHELLEY KEATS, the apple of her father’s eye, works with him and makes him sigh. Her artistic flair with just plain dough, can turn a cake into a rich Gateau, and a plum- duffing into a princely plum pudding.

BABIES LARKIN, LEWIS, CLARE & DYLAN KEATS, the babies with lots of treats. They are the family tasters, when it comes to food they are no wasters. If they like the latest creation, it is bound to be a great success across the nation! 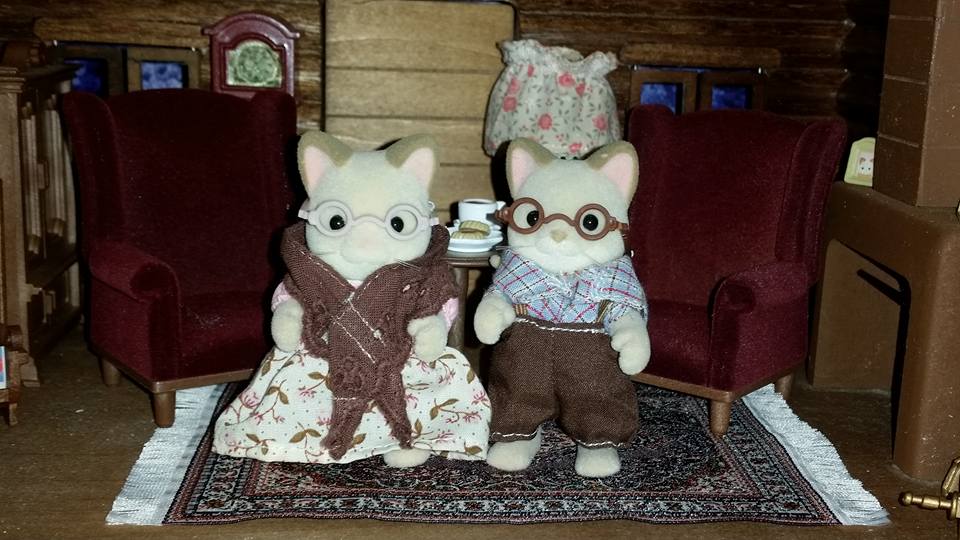 GRANDFATHER MILTON KEATS is a poet who spends his days finding ways to make his written prose as beautiful as a wild climbing rose. Inspired by all the beauty around him, his desire to write will never grow dim.

GRANDMOTHER LOUISE CARROLL KEATS is also a writer, but of funny rhymes rather than clever prose. Like the one of the rabbit that lost its nose! He didn't wash and began to smell, he could not tell so all was swell! 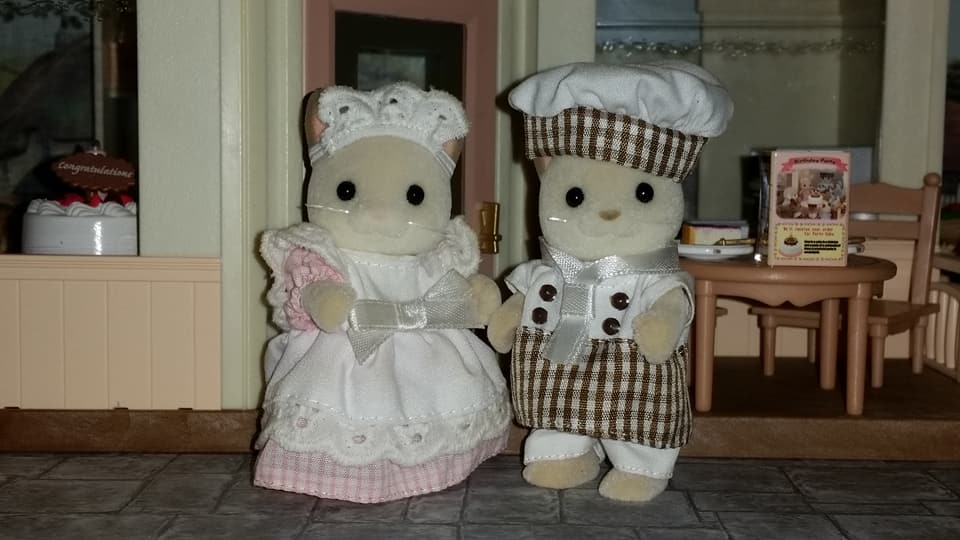 AUNTIE AGATHA KEATS works in the Cake Shop, alongside her husband and her in-laws. It was Agatha's suggestion to add seating outside, so villagers could stop by for a cup of tea and a slice of cake on a walk through the village. 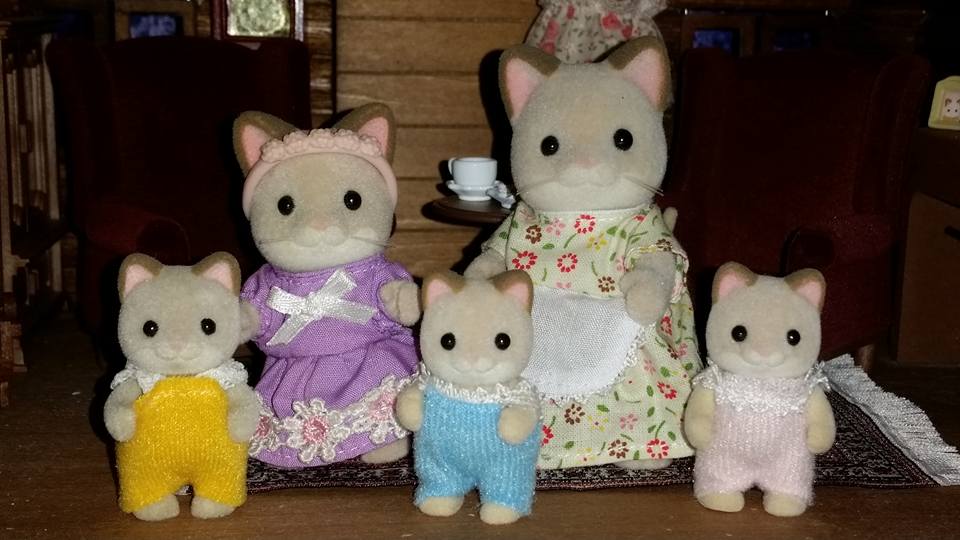 AUNTIE DAPHNE KEATS loves going for long bike rides throughout the countryside on her tandem, with her babies being pulled along in the trailer. At the end of a long bike ride, she likes nothing more than stopping at the family Cake Shop for a nice cup of tea and a slice of cake.

COUSIN ABBIE KEATS has been practising a special Maypole dance for some time now with her best friend Poppy Dappledawn. She can't wait to show the rest of the village how good they are.

BABIES ELLIE, MAY & TWAIN KEATS like nothing more than going for bike rides in the trailer of their mother's tandem bike. They just love watching the countryside go by, but wish their mother would go faster!

The Keats Cat family were first released into the Sylvanian Families range in Japan in 2006, with a UK release the following year. The chef and waitress were exclusive to Japan, and came with some versions of the cake shop. Their costumes were also available separately without figures. The older sister is also a Japan exclusive, I believe she was a club exclusive figure, like the original older sister to the Chocolate Rabbit family. The grandparents were released into the UK range in 2009, two years after the release of the family. In 2012, Flair released relatives into the Keats family in two special playsets. Auntie Daphne came with babies Ellie and May in a special tandem bike set. Cousin Abbie came with Poppy Dappledawn as part of the Maypole dancer set. These two sets were released at the end of the Flair distribution deal, so had a limited run and have already started to become hard to find. The third baby in yellow was released in a special baby playset with two other babies, and did not have an official name.


*All names and descriptions in the red colour are what I have created myself, for figures who had no official name or biography. They are not official names or biographies.*
Powered by