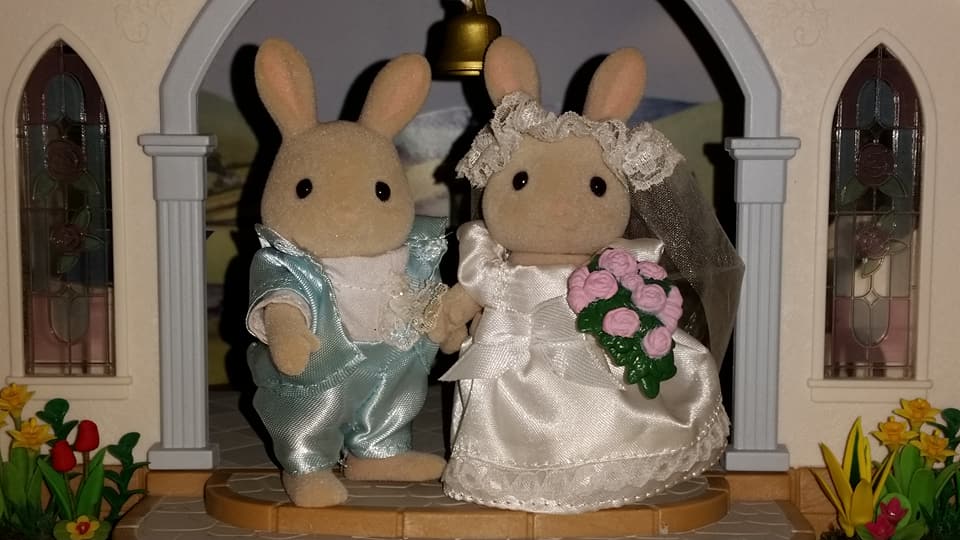 It was at the Village fete that these two lovebirds first met. The village marquee was full with various stalls, the cake stand, the vegetable stand, the arts and crafts stand to name but a few. It was at the cake stand that these two first met. They both wanted to buy the last slice of the winning cake, baked by Ginger Wildwood. Hugo suggested that Hermione have the slice of the delicious spiced carrot cake, but she offered to share it with him. They sat outside the marquee, under the old oak tree and shared their slice of cake, and spent the rest of the day together chatting away.

After that first, fateful meeting, they started spending lots of time together. Walks along the river, evening meals at the Harvester Restaurant, lunch at the Blackcurrant cafe. It was during lunch at the Blackcurrant cafe, that Hugo surprised Hermione with a proposal. He had already enlisted the help of Marion Brighteyes, who came over with a large cupcake for Hermione's dessert. When Hermione looked down at the cupcake, instead of having a cherry on top, it had an engagement ring. When Hugo asked her to marry him, she made the whole cafe jump by squealing yes very loudly and many times.

The months of preparations for the wedding seemed to go really quickly, and before you knew it, the big day had arrived. It was a beautiful sunny spring day, with all the flowers coming out in bloom. Hermione looked stunning walking down the aisle in her flowing dress, while Hugo made such a handsome gentleman in his blue suit.


The Honeydew Rabbit Wedding set was first released into the UK Sylvanian Families range in 2006, as part of the new wedding range. It had been released into the Japan range the previous year. As part of the wedding range, a church building was released (the first into the UK range, the second in the Japan range), along with a white wedding car (previously released as part of the Urban Life range), a wedding reception set, and a bridesmaid duo set of Melody and Mimi. The Honeydew Rabbits are part of the Perriwinkle Milk Rabbit family, as are the two bridesmaids. I was quite lucky to find a Japan shop display on E-Bay, consisting of the bride and groom, and also various guests in their smart wedding attire from this range. The figures with that set were never released commercially, and you will see them in several pictures of the wedding sets on my site.
Powered by