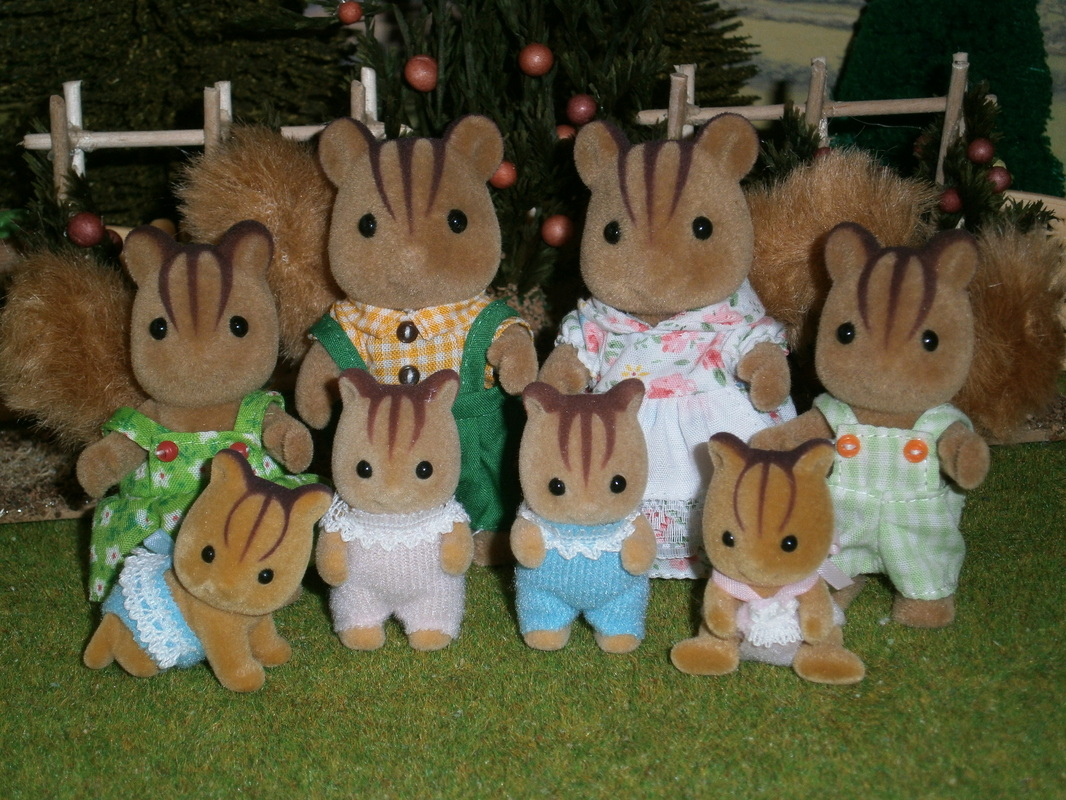 FATHER KENNETH FURBANKS is a celebrated Sylvanian actor and the winner of many awards. They are all kept in full view on his mantlepiece and he regulary runs his finger over them to check that they have been properly dusted! Of course, pride of place is always given to his most prestigious awards, the ones he won for The Taming of the Squirrel and The Merchant of Sylvania. He has always taken acting awfully seriously, but nowadays he also likes to spend his time directing! He can think of nothing better than sitting on a black canvas chair with his name on the back and ordering other actors around in his big booming voice! He hopes that one day he will win an award for this too!

MOTHER EMMA FURBANKS is also a famous actress and met her husband when they were in the same play together. She likes to behave as though she is on the stage even when she is not, always behaving in a very theatrical way and speaking in a soft breathy voice. She calls everyone 'darling' or 'lovey' and that is because she is always so busy trying to remember her lines that she forgets everyone's names! Her children have got used to it by now, but her husband still gets very cross about it. In fact he simply refuses to answer her unless she addresses him as Kenneth!

SISTER GRETA FURBANKS has the acting bug too. Luckily she is just as talented as her father and always gets the leading role in the school plays. Unfortunately she has also got a bad memory like her mother so she has to spend a lot of time alone getting on with the serious business of learning her lines. The only way she can remember all the words is if she repeats them over and over again, which can certainly get a little boring for her friends. The moment they hear her start to recite any of her speeches, they scarper as fast as they can!

BROTHER DOUGLAS FURBANKS is also known as Junior. He spends most of his time in an imaginary world of his own – a world populated by pirates, white knights and fire-breathing dragons. He particulary enjoys dressing up in colourful costumes and often jumps out on his poor sister waving a plastic sword or wearing a black patch over one eye. Thankfully Greta loves her brother so much that she doesn't mind at all. Sometimes she even agrees to dress up as a damsel in distress and allow her brother to rescue her!

BABIES RAY, FAY, JOAN AND JIM FURBANKS have literally been born into the acting profession – and love it! They haven't had any speaking parts yet as they are too young, but they certainly have great fun playing with all the make-up and face paints. If someone isn't watching them very carefully, this naughty group will soon cover themselves from head to toe in bright colours. Apart from that, they are very good and never cry or make a fuss while their parents are performing on stage. 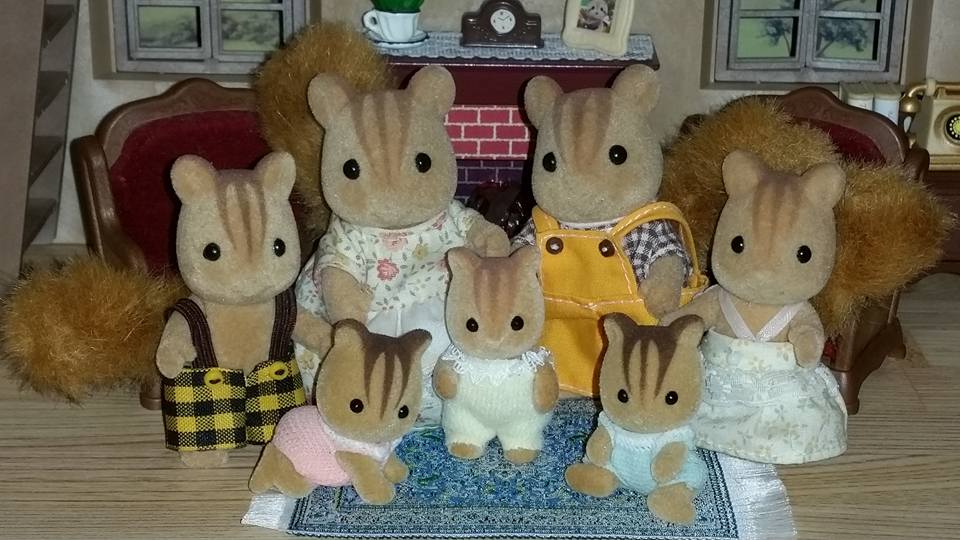 FATHER CHARLES FURBANKS like his brother Kenneth, is also an actor. He likes to help organise the Sylvanian Christmas Pantomine each year, last years was held on a rather rickety makeshift stage in Berry Grove School. Charles also takes his acting awfully seriously, he couldn't help but look upset when his wife Babs won an award at the Annual Sylvanian Acting Awards and he didn't!

MOTHER BARBARA FURBANKS (known as Babs to all of Sylvania) is very modest when it comes to her acting skills, she always insists her husband Charles is much better than her. She always gets excited at the casting auditions for the latest Sylvanian production. The castings will be under way soon for this years Christmas Pantomine, and Babs is hoping she will get to play the Fairy Godmother in Cinderella.

BROTHER SIDNEY FURBANKS is different to the rest of his thespian family, in the fact he does not like performing whatsoever. He much prefers writing, where he can really let his creative juices flow. For someone so young, his writing is much more advanced for his years. Last year, his uncle Kenneth asked him to write the summer play, which he did, and the show was a massive success. His mother thinks he will become a very famous playwright when he is older.

SISTER HATTIE FURBANKS is a very quiet young lady, with booth feet firmly on the ground. She is a perfectionist and everything has to be 'just right'. She likes to help out with her family productions, but from backstage. She often helps to design and make all the costumes. She has spent a lot of time with Eleanor Bramble, learning how to use a sewing machine so she can make strong and sturdy costumes.

BABY TRIPLETS THEO, CLEO AND LEO FURBANKS are often enthralled watching the family rehearse for their latest play. They enjoy seeing who their parents will be next, as they have seen their mother go from princess, fairy and witch, to their father going from prince, knight and Robin Hood. 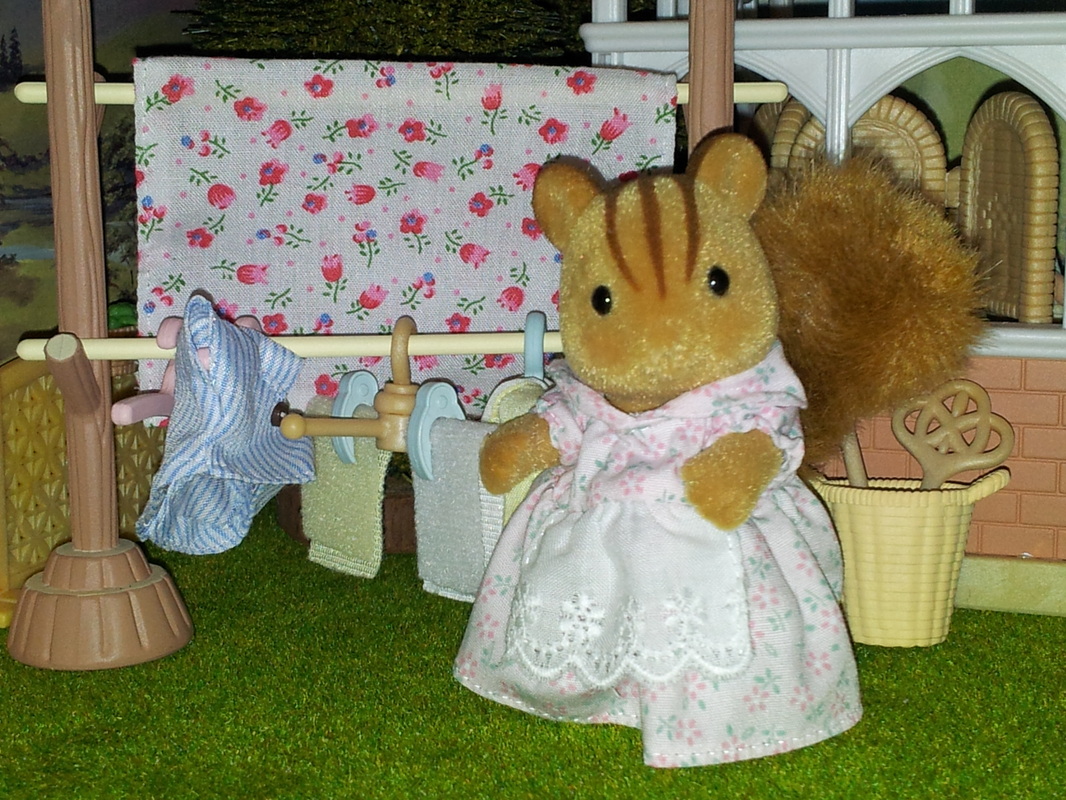 AUNTIE SHERRIE FURBANKS can usually be found going around Sylvania selling tickets to the latest theatrical production put on by her family. Her job in the productions is usually to design and make all the programs and the publicity posters, and also sell tickets. She is very artistic, which helps, as it can be very demanding. Once all her posters are printed, she is off around the village, asking to put pictures in all the shop windows and bus stops. She absolutely loves doing this though, as she finds it a much more social role than being on the stage.


The Furbanks Squirrel family were first released into the UK Sylvanian Range in 1994, having been released in the Japan market previously. They were the second Squirrel family, following the Oakwoods. This time though, their tails were bushy and they used a different mould to the Oakwood family. The sitting babies were exclusive to Japan, the UK got standing babies. The re-release saw the twin babies released in the US and not the UK. The Furbanks had their re-release in the UK in 2004 wearing new outfits to the original version. A few years later, they were joined by two new Squirrel families, who both used the same mould as them.