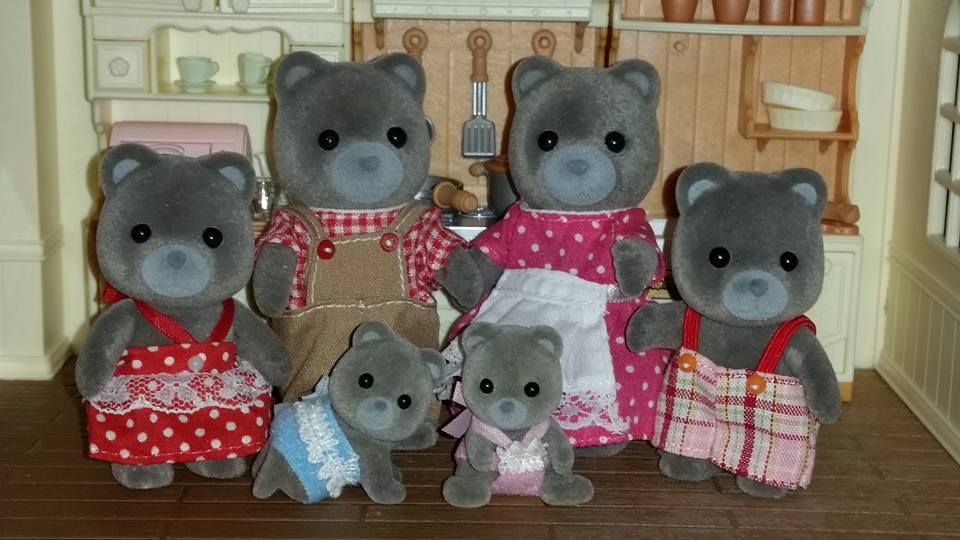 FATHER MORTIMER CALBEE has an unusual job, he makes crisps! Following an old family recipe, passed down through generations, his crisps are loved by all Sylvanians, old and young. All his crisps are made with potatoes grown in his garden. Once all the potatoes are picked, Mortimer enlists the whole family to help him wash them and then peel them. Once peeled, Mortimer and his wife Sylvia then cut the potatoes into thin slices, before adding the 'secret' flavourings. Once all the 'secret' herbs and spices are added, the potato slices are then cooked, making them into crisps!

MOTHER SYLVIA CALBEE works with her husband, Mortimer, making delicious crisps for the whole Sylvanian village. Sylvia is very creative, and likes to create exciting and delicious new flavours. She can often be found mixing different herbs and spices, before adding them to the crisps. She always tests the new flavours on her family, before unleashing them on their friends and neighbours!

BROTHER MAXWELL CALBEE can often be found in the garden, tending to his fathers vegetable patch. An avid gardener, Maxwell has a small section in the family garden where he grows his own vegetables and flowers. He was extremely proud of his pumpkins he grew last year, they won first prize in the village fayre!

SISTER FRANCESCA CALBEE loves helping her parents making delicious crisps. Like her mother she is very creative, but she is still learning her art. Her attempt at strawberries and cream flavoured crisps didn't taste as nice as she imagined!

TWIN BABIES GRACE & NILES CALBEE can usually be found in their parents kitchen, playing with the left over potato peelings! They caused panic in the household once when they disappeared, only to be found an hour later fast asleep under a mountain of potato peelings!


The Calbee Bear family were released in Japan during 2004, as an exclusive promotion with the crisps brand Calbee. The family came in three seperate boxsets, Father and sister, mother and twin babies, and also the brother with a vegetable patch. Each box also came with a packet of Calbee crisps, with a picture of the father on the packet. I am not sure what the promotion was at the time. The Calbee Bear Family are very hard to find, and quite rare now. I was lucky to find mine on E-Bay a few years ago now, all MIB. The family had no official names or biographies, so I have created my own.
Powered by