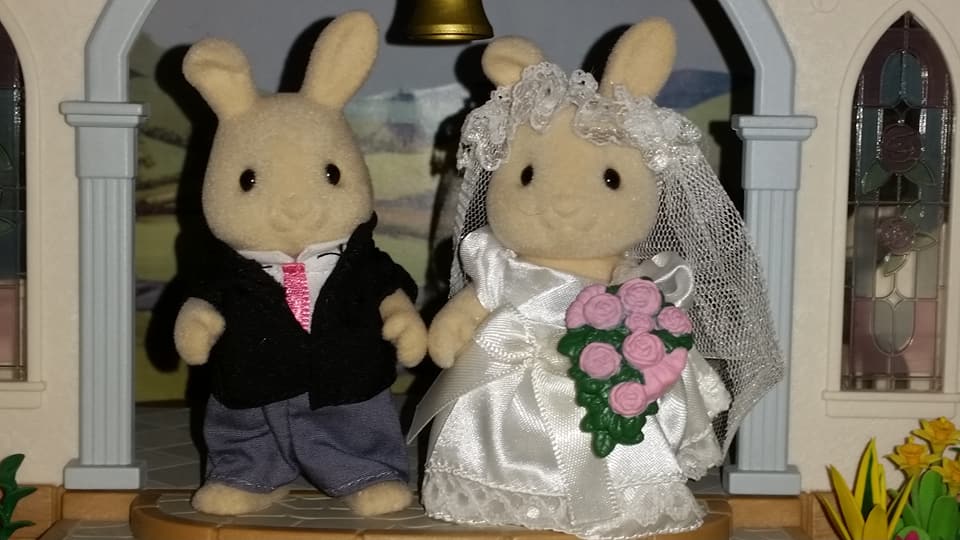 Tabitha and Jonathan's wedding day has finally arrived! The groom is so handsome and the bride looks absolutely radiant. The Sun is high up in the sky, and the birds are singing on such a glorious day. Everyone in the Sylvanian Village have gathered at the village church to watch Reverend Kelvin Waters join these two childhood sweethearts in marriage.

Jonathan and Tabitha have known each other ever since they were babies, their families lived next door to each other. They grew up playing with each other as children, and as they grew older they even went to school together. They were inseparable for most of their lives. Headmaster Aristotle Treefellow even said that he wouldn't be surprised if they ended up married to each other when they were adults. Their beautiful wedding outfits were created by Mortimer Bramble and Jonathan's own sister Andrea Butterglove, in the village boutique.


The Butterglove Rabbit wedding set was released into the UK Sylvanian Families range by Flair in 2012, one of the last releases Flair oversaw into the UK range before EPOCH took over the distribution of Sylvanian Families in the UK. It was quite a big set launched, with the church getting a re-release (this time with a red roof), a special marquee, a furniture set, a new wedding car, bridesmaids and even a photographer and cake set. The whole 2012 wedding range had a short life in the shops, as when EPOCH took over the UK distribution it was one of the ranges that they did not continue. Most of the range is still easy to find online. This was the third Butterglove/Ivory Rabbit wedding set released, but the first for the UK. Japan had previously had two different wedding releases featuring the Ivory Rabbits. I believe this release was a UK exclusive.
Powered by