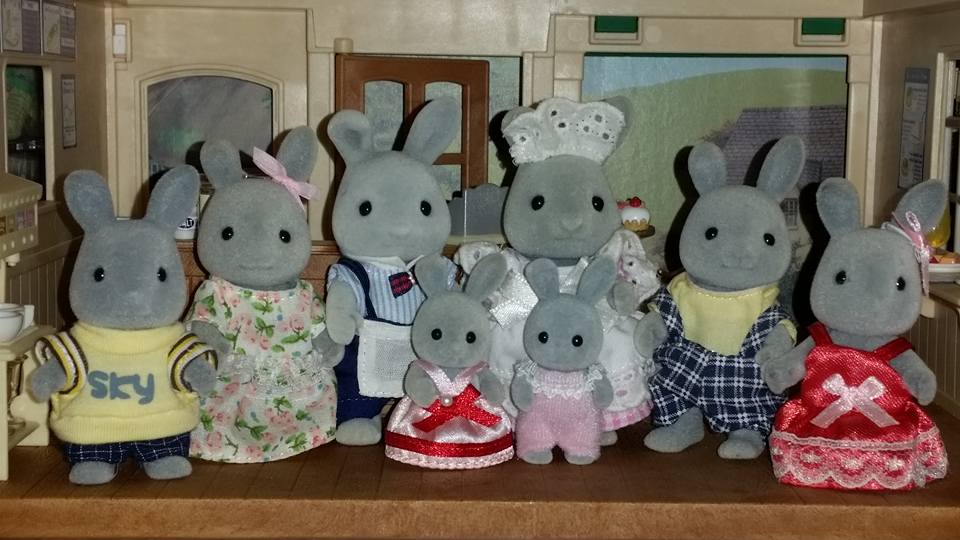 FATHER OLIVER BRIGHTEYES works for his wife, Marian, in the Blackcurrant Cafe. You can usually find him waiting on the tables, and carrying people's food and drink orders over to their table. Although you might find it strange, Oliver working for his wife, he quite enjoys it. He always tells the customers “She's the boss at home as well, at least here I get paid to be told off by her!”, of course, he is only joking. In fact, it was Oliver's idea for Marian to open up Blackcurrant Cafe. She was always baking far too many cakes at home, so he suggested that they have a cafe where at least she can share them with the public.

MOTHER MARIAN BRIGHTEYES is the cafe owner. She loves to make cakes and sell them with her teas and coffees. She also does a thriving takeaway trade in cakes for parties and picnics, and she always supplies the Bullrush's River Boat trips with their lunches. Her cafe is always busy, picking up throughout the day and quietening down when the parents have gone to collect their children from school. She has just purchased a very posh coffee making machine, which makes the nicest and poshest coffees in all of Sylvania. She has told Oliver she wants one for home now!

OLDER SISTER BELINDA BRIGHTEYES There is no one friendlier than Belinda Brighteyes in all of Sylvania. She loves to chat and, no matter how busy she is, will always stop what she's doing and listen to everyone's latest tidings. If their news is bad she'll give them a sympathetic hug and if it's good she'll clap her tiny hands with happiness. This means that she herself always turns up late for everything, although of course no one in Sylvania ever seems to mind!

OLDER BROTHER PETER BRIGHTEYES is the exact opposite of his twin sister. He never has time to chat with anyone as he's too busy training to be a long-distance runner. This means that he never knows what is going on in Sylvania, although according to him he doesn't care a jot. Indeed he loves to tease his sister about her soft heart and often pulls the pretty pink ribbon around her ear before running away as fast as he can. Of course, he loves her too really!

YOUNGER SISTER CHARLOTTE BRIGHTEYES was so excited to be asked to be a bridesmaid with her younger sister Olivia for their friends' Tabitha and Jonathan's wedding. She was even allowed to pick the colour of her dress, so she chose her favourite colour red. When she isn't getting excited about weddings, you can usually find her in her parents' cafe, helping out so she can get one of her mother's famous cakes.

YOUNGER BROTHER MARTIN BRIGHTEYES loves helping out in his mother's cafe at the weekends. He will always clear all the tables, and he loves washing all the dishes. His mother Marian wishes that he was just as helpful at home!

BABY SISTER OLIVIA BRIGHTEYES like her sister Charlotte, was very excited to be a bridesmaid. Although during the wedding, she did think all eyes were on her and not on Tabitha, the blushing bride! Olivia looks up to her older sister Belinda a lot, and can often be seen trying to follow her around. Belinda doesn't mind of course, when she sees Olivia following her she usually scoops her up in her arms and carries her along.

BABY SISTER BETTY BRIGHTEYES is quite a contented young baby. She is always happy, especially when her parents take her to the cafe with them, and she can eat a slice of carrot cake!


Belinda Brighteyes is probably one of the most famous Sylvanian Family figures, having been the face of the Sylvanian fan club for over twenty years. The Brighteyes family have never been released as a full set, just individual figures to collect. The first two members of the family were launched at the very beginning of Sylvanian Families, in a wedding set 'Bobby and Louisa Brighteyes'. Belinda and Peter were exclusive figures when you joined the Sylvanian Fan Club. The mother was released as an individual figure with the launch of Blackcurrant Cafe in 2012. The baby sister and sister were launched the same year as bridesmaids in the latest wedding set launch. A father was never released officially, I made mine by using a duplicate Marion figure and a waiter's uniform I got included with the 'House of Brambles Department Store'. I also created a younger brother with a outfit I purchased from the Sylvanian Shop in London. I have included the family under the 2010-2015 families, as that is when the majority of them were released.