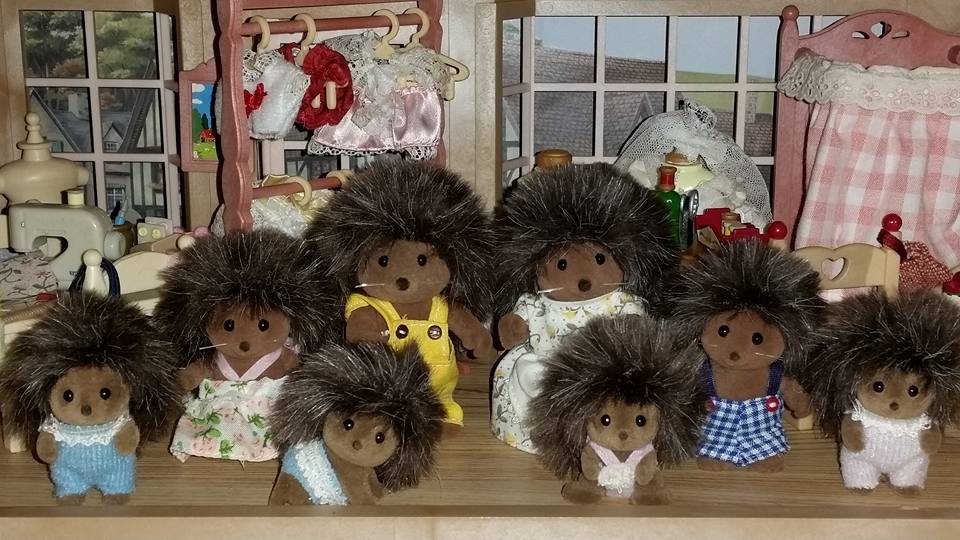 FATHER MORTIMER BRAMBLE is a tailor. He makes all the clothes for everyone living in Sylvania and he loves to sew while gently rocking backwords and forwards in his rocking chair. He learnt his trade in Sylvanian Row, working alongside his own father who taught him how to use a tape measure, make up the complicated patterns and then expertly cut the cloth. Mortimer can be quite a prickly person though, especially if any of his customers have a complaint. Luckily this happens very rarely as Mortimer puts his heart and soul into his work – and if someone does tell him that they don't like a suit or a dress, he always agrees to make another one at no extra cost.

MOTHER ELEANOR BRAMBLE designs all the special Sylvanian costumes like the wedding outfits and clothes for Sunday best. She has a good eye for colour and knows immediately who would suit a red waistcoat and who would suit a blue one. She particulary loves dressing the ladies in yellow gingham and never lets anyone buy a 'special occasion' dress without a pretty white petticoat underneath. Now Mortimer has also taught her how to actually make the clothes, so she has become a very important member of his team. But she usually takes her sewing home so she can look after her youngest children there – Mortimer gets even more prickly if they are running around his feet when he is working!

BROTHER MAXWELL BRAMBLE is learning how to be a tailor like his dad. He is particulary good at measuring up material, but Mortimer won't let him play with needles and scissors yet as these can be dangerous. Maxwell doesn't mind this at all as it means he still has plenty of time to play with his school friends. He enjoys anything from tag to hide-and-seek, and the only game he doesn't really like is kiss chase. Statues is still his number one favourite though as no one can stay as stil, quite like Maxwell, even if someone tries to tickle him!

SISTER ABIGAIL BRAMBLE likes designing clothes. She is especially good at designing dresses for herself, and Mortimer and Eleanor are quite happy to make them for her – but only if she is good! Luckily Abigail is well-behaved practically all of the time and likes nothing better than to sit quietly at a little table in the corner of her father's shop and design her next collection. Sometimes she gets quite adventurous and creates matching shoes, hats and handbags too – her parents only wish her brother was so industrious!

BABY BROTHER BILBERRY BRAMBLE loves to gather up all the scraps of material that are left over. He builds a colourful pile, curls up right in the middle of it and goes fast asleep. People are often quite taken aback to hear snoring noises coming from a pile of rags!

BABY SISTER PEACHES BRAMBLE is a very, very naughty little girl! She is always taking her father's tailor's chalk and drawing patterns on the walls and furniture. Her mother hopes that all this creativity is going to be used for a better purpose when she gets older!

BABY TWINS CINDY AND PRICKLES BRAMBLE love to play hide-and-seek with each other. The trouble is, they love playing it when they have been taken into their father's boutique. Many a time a Sylvanian has been looking at an outfit on a dummy to see it suddenly start moving, with one of the twins popping out underneath it. Thankfully the customers know about the twins habit now, so there are less shocked customers in the shop! 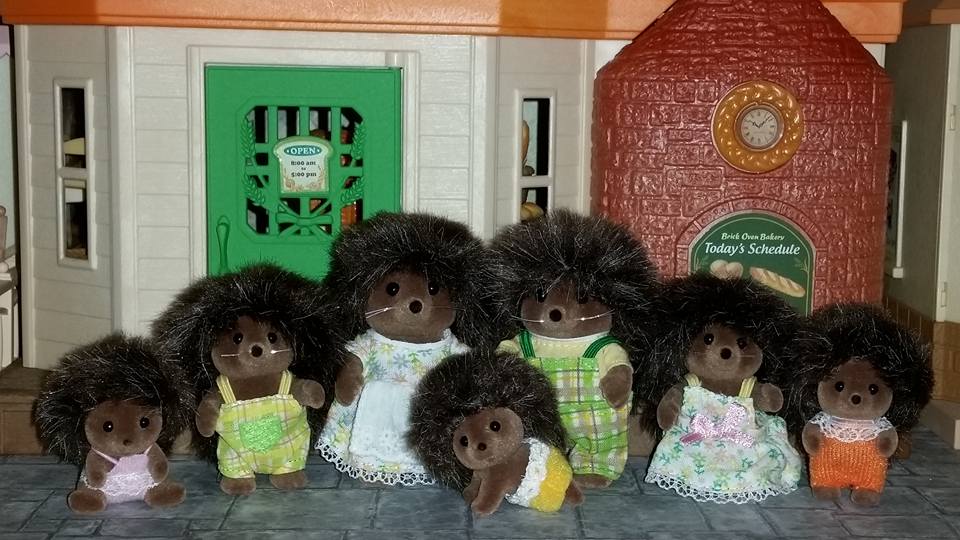 FATHER HAROLD BRAMBLE is a carpenter. He has his own workshop at the bottom of his garden, where he is often found making furniture. He made all the shelves and display cases in his brother, Maxwell's boutique, and also made all the shelving and cabinets in the Brick Oven Bakery for his sister-in-law, Helen. As a a thank you, his sister-in-law always makes sure he gets a freshly baked loaf of bread each morning, and his brother always gives him a new shirt for free.

MOTHER HELOISE BRAMBLE has her hands full at home. When she isn't dusting away sawdust from her husband's workshop (which always manages to get on her lovely shelves, even from the bottom of the garden!), she is running around after her five children, making sure they are behaving and not causing too much mischief! If she ever gets any spare time, she likes to go for a cup of tea in The Blackcurrant Cafe with her good friend, Lauren Porridge, where they can have a good catch up.

BROTHER HARRY BRAMBLE is a very good boy. When he isn't at school, he likes to help his mother around the house. His favourite job is mopping the floors, he likes to pretend he is swabbing the decks of a big pirate ship! His mother doesn't mind, she is just glad he doesn't use as many suds now he is older!

SISTER HAYLEY BRAMBLE is a very busy young lady, she already has two after school jobs! She helps her Auntie Helen in the Brick Oven Bakery, twice a week, where she helps her clean all the used utensils at the end of the day, and she has just started learning how to bake bread as well. She also helps out in her Uncle, Maxwell's Boutique twice a week. There she helps to brush up at the end of the day, and is also learning how to make her own dresses! Hayley is not sure what career she would like as an adult yet, but her father jokes she could have the first bakery in the village where you could also buy a dress!

BABY TRIPLETS HARVEY, HANNAH AND HENRY BRAMBLE are very musical. Whenever they are in the nursery they make a bee-line for the instruments and start making lots of noise!  Because of their young age, they can't really make anything resembling a tune yet, it just sounds like a loud din! But their nursery teacher, Andrea Butterglove has told their parents, when they get older they might make really good musicians, or a really good burglar alarm! 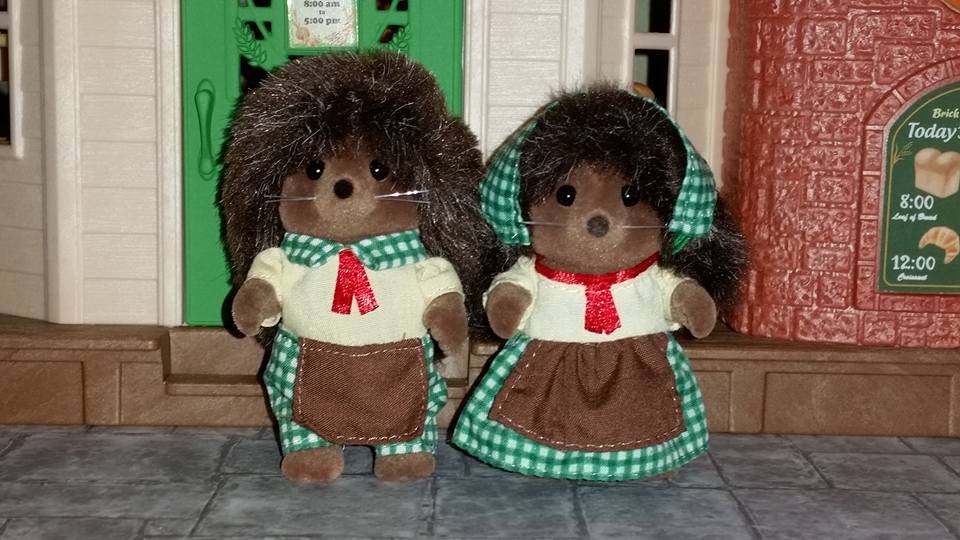 AUNTIE HELEN BRAMBLE is the baker in 'The Brick Oven Bakery' in the Sylvanian village. Every morning at 4.00am she is in the bakery, preparing all the ingredients she needs to use to bake the most exquisite bread. She has a timetable outside her shop, telling her customers when each of her delicious pastries and breads will be ready. One of her best skills in baking, is being able to create faces and even buildings just from bread. A skill she learned from her good friend and fellow baker, Christopher Apple-Blossom, who runs the 'Watermill' bakery.

UNCLE WILBURT BRAMBLE works alongside his wife in 'The Brick Oven Bakery', except he makes and delivers delicious pizzas. Helen makes all the pizza bases for Wilburt, and he is left to put on the delicious toppings. He also runs a delivery service for his pizzas, and is especially busy during the lunchtime hour in the village, as many business owners call him for their lunch. You can often see Wilburt zooming through the village on his little delivery bike, going from house to house, and shop to shop!


The Bramble Hedgehog family were first released in the UK in 1991. They were originally designed specifically for the UK market. The all came with a comb and a brush so their hair could be brushed. When the family were released into the US market, under the Calico Critters brand, they were renamed 'The Pickleweeds'. The US version of the family had the sitting baby twins as an exclusive. The family was relaunched into the UK market by Flair in 2004, where they were given a continuous run. They are still available in 2016, making them one of the longest running families. In 2015 EPOCH launched a new hedgehog family in Japan (the first Hedgehog family in the Japan range), with them being bakers, running a new bakery. The bakery and pizza delivery service was launched into the UK range in 2016, available from the Sylvanian shop in London from Christmas 2015.

*The biography for the Bramble Hedgehog Family is taken from the Sylvanian Families Club Magazine. The names and biographies in red and italics were created by myself, as no official biography exists for these figures. The names of Harold, Heloise, Harry & Hayley (spelt Haley) are the Calico Critters names, but the biographies are not from the Calico Critters.*
Powered by