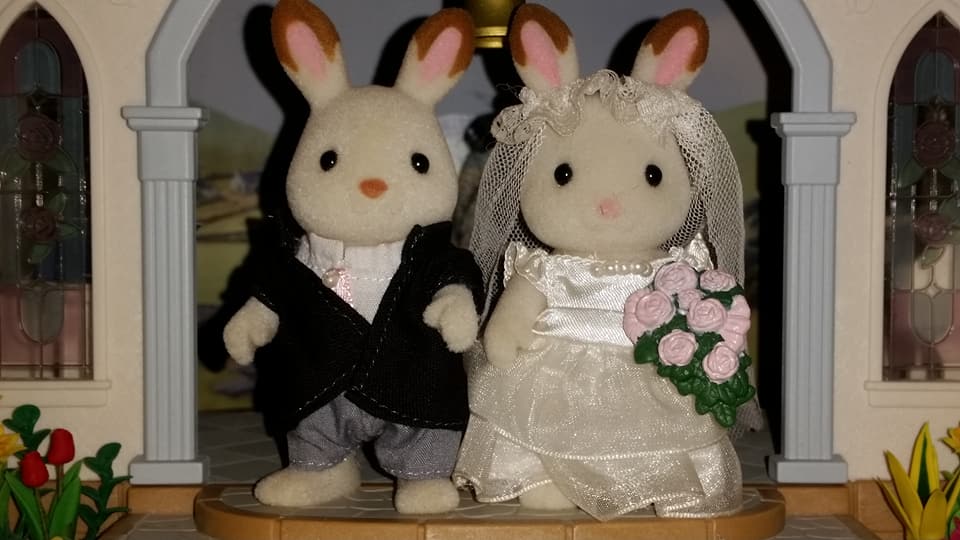 GROOM WILLIAM BALMORAL first met his sweetheart Catherine in college, when he was training to be a chef. It was love at first sight, but William was far too shy to ask Catherine out on a date. Unbeknownst to William, Catherine also liked him and was waiting for him to ask her out. Eventually, it was at a cake competition where William had made a beautiful three tier chocolate cake that they finally arranged a date. William offered Catherine a slice of his winning cake, and after that they were inseparable.

BRIDE CATHERINE BALMORAL always helps out at her sister Terri's restaurant, whether it is in the kitchen helping to create the delicious meals, or waitressing on the tables. She is hoping that after their marriage, she and William will be able to open their own little restaurant down on the sea front.

The big day has finally arrived in Sylvania. Catherine is looking beautiful in her bridal gown, and William is feeling a little nervous. The Reverend Kelvin Waters will ensure the ceremony runs smoothly. The Bridesmaids and Page Boy are being on their best behaviour, and the sun is shining - perfect!

The Balmoral Chocolate Rabbit Wedding set was released into the UK range in 2011, to commemorate The Royal Wedding. It was the first UK set to be associated with Royalty. It came in one of the Celebration boxes, which had previously only been used for special release family sets. This set came with the Bride and Groom, along with the Reverend Kelvin Waters, Page Boy James Perriwinkle and Bridesmaids Louise and Amelia Perriwinkle. The Reverend Kelvin Waters got re-released the following year with a Church building.
Powered by